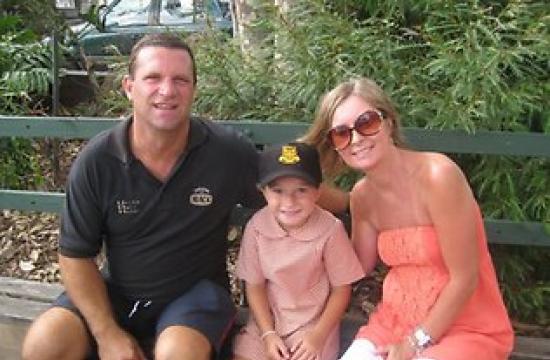 The Los Angeles County coroner’s office has identified Gary Robert Mara as the 50-year-old Australian tourist struck and killed by a suspected drunk driver in Santa Monica on Tuesday evening.

Mara, along with his wife Julianne and eight-year-old daughter Olivia, were on the north sidewalk on the 300 block of Colorado near the Santa Monica Pier at the pedestrian crosswalk at 8:15 p.m. and allegedly started to cross despite the solid red “Don’t Walk” sign.

Mr Mara was hand-in-hand with his daughter in the middle of the road, ahead of his wife who saw the car first.

The driver turned eastbound on Colorado Avenue from 2nd Street on a green light, but was unable to stop.

Mr Mara took the brunt of the impact as he was hit on the left side of the 2005 Ford Focus with their daughter clipped by the right.

“Gary picked Olivia up and threw her out of the way and saved her life,” Mrs Mara told Australia’s Channel 9 News.

He suffered critical injuries as a result of the collision; he was transported to a local trauma center. He succumbed to his injuries in the early morning hours of Wednesday, Aug. 22.

His daughter suffered minor injuries; she was taken to a local hospital for treatment. His wife was not injured.

The driver, identified as 26-year-old Cara Cameron of Westchester, California, remained at the scene of the accident.

During the investigation, officers determined that Cameron was under the influence.

Cameron was taken into custody and booked at the Santa Monica jail for driving under the influence and vehicular manslaughter while intoxicated. Cameron later posted $100,000.

Cameron’s arraignment date has been set for Sept. 21 at the LAX branch courthouse.

The family was visiting Santa Monica as part of a vacation to celebrate Mr Mara’s 50th birthday and the couple’s 10th wedding anniversary. The family had plans to fly to Hawaii today, Aug. 24.