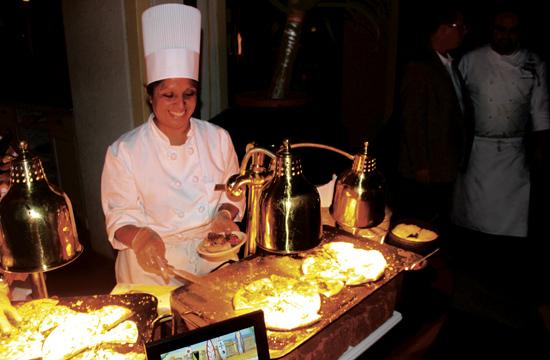 The goal would be to bring together the hotel’s guests – and more importantly local residents – to celebrate why people visit and live in Southern California.

In March this year, his plan came to fruition with the soft launch of the “Live From Loews: California Classics” series.

Each month since then, the concert series has grown with hundreds of people coming together from 6:30 p.m. to 9:30 p.m. for an evening of fun under the stars.

“I really feel responsibility to bring something to life in our local community that brings locals into the hotel,” Leclerc said. “There are so many places to go – so many great restaurants, bars, and venues in Santa Monica and the local area and sometimes people just forget that there’s a hotel down the street and it’s not just for the tourists who are visiting. We really want to embrace our local clientele.”

He said the food had Spanish and beach influences while the wines were primarily from Santa Barbara and the beers were from local craft breweries.

In terms of the music, all the bands are selected by Leclerc and are chosen for their focus on the essence of Southern California.

At the cost of $45 in advance or $55 at the door, Leclerc said the monthly event was not one he intended to make money on.

“It’s a break even event and the focus is primarily to do something that gives our local community and our guests an opportunity to really enjoy our exceptional location and the offerings of our hotel,” he said.

Executive Chef Keith Roberts is kept busy during event, which is all hands on deck with 20 of his team working behind the scenes and at various serving stations in the hotel’s foyer and outside around the hotel’s pool.

He said he loved the event for so many reasons.

“It’s intended to be a fun, casual event that showcases the local southern California beach environment with music, food, and beverages,” Roberts said. “We want to continue to grow the event and welcome more local residents and guests to it.”

He said the event has given him the chance to showcase the restaurant’s food to locals.

“Since we change our menu every event, it gives me a chance to test new food,” he said. “I’ve got two new pizzas on our fall menu that we did on an event a couple of months ago. We’ve tested a few new banquet items too. It’s just a fun event for us to have people enjoy the great views that we have to offer.”

Some of Friday’s items included freshly made sushi, chicken and beef skewers, fish tacos, mini-pizzas, sliders, corn on the cob with house-made butter, and variety of desserts like chocolate covered cheesecake lollypops.

Next month’s event on Sept. 14 will be the sixth concert featuring the John Brown Band. The concert series will continue every month, but most likely take a break in December for the holidays before returning in January.

Leclerc said he has received plenty of positive feedback – one guest’s comment last Friday has left a lasting impression he may just trademark it.

“We have a new tagline I’d like to share with you,” he said. “A guest told me: ‘I’ve never been to a concert that tasted so good.’ So that’s our new tagline: ‘California Classics: A Concert Never Tasted So Good.”

For advance tickets to next month’s event, visit www.ticketfly.com/event/141376.