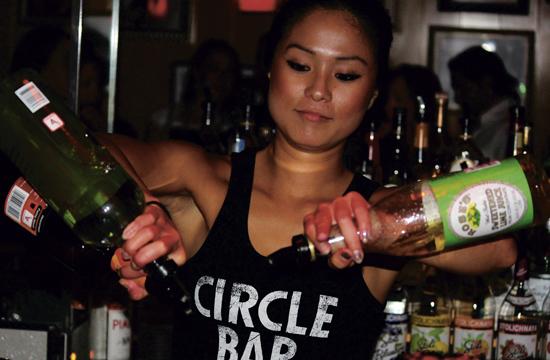 Circle Bar on Main Street in Santa Monica has become one of the most popular destinations for people who want to grab a drink and feel the beat or nurse a beer and tap the feet.

With low red lights and groovy atmosphere, it’s no wonder that the place is still jumping and especially now, after a remodeling, the owners are excited about the prospect of attracting new fans while invigorating their core clientele.

“We basically have remodeled the entire interior,” said General Manager Jeff Enden. “We redesigned the wall and have all original photos now.We also have a new sound system and the bathrooms have been redone”

Enden said he is eager to show everyone the new face of the hangout.

“We took everything off the walls and we redesigned the bar top, added new booths, a new sound system, and a new black granite bar,” he said.

Circle Bar is owned by Howard Alpert and Will Karges who took over ownership of Circle Bar in 1999 and have been remodeling the bar over the last decade in order to keep its vibe fresh, new, and exciting.

The walls are covered with old photographs of Santa Monica and Venice and everyone likes taking time to stop and talk about the past.

“The Doors and Truman Capote used to come to this bar,” said Alpert.

“We didn’t change too much and want to give people something to talk about,” said Enden.

Over the years, though, the way people interact has changed drastically with the creation and subsequent love-affair with social media and the owners of Circle Bar are embracing it with enthusiasm.

Summer Nights at Circle Bar offers those connected to Facebook, Twitter, Foursquare, or Yelp, a check-in feature that discounts drinks of choice from a $3 domestic beer to $5 well cocktails any night any time, just show your check-in to your bartender.

Years ago Circle Bar got a bad reputation attracting a bad crowd, but things have changed with new ownership of the bar.