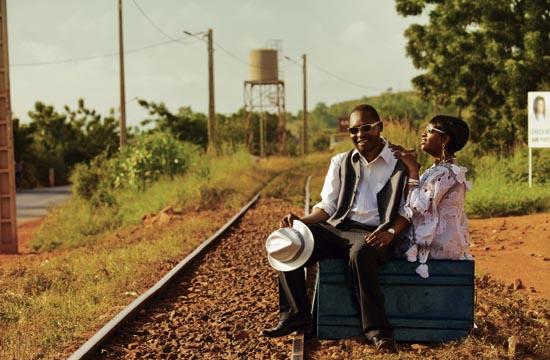 A musical combination of sophistication and simplicity will be showcased this Thursday, Aug. 16 at the seventh Twilight Concert of this summer.

Headlining from Mali – Amadou & Mariam’s music captures both the organic and electronic soul of music. Expanding genres, the blind husband and wife duo present a sound that is both exotic and captivating.

Amadou Bagayoko and Mariam Doumbia met in 1977 at The Institute for Young Blind in Bamako. Inspired by American rock bands of the time, blues singers, French musicians, and traditional African music, the two decided to follow their own calling hand in hand.

In 1993 Amadou & Mariam would drop their first album for an audience (outside) of Africa entitled “Sou Ni Tile.” The progressive yet retro sound captured the attention of acclaimed musicians like Santigold and Manu Chao, generating collaborations for the years to come.

The duo will grasp the Santa Monica Pier this Thursday, promoting their newest album “Folia” and exposing a sound that may be new for many. The couple explains that their music portrays “a peaceful message, a message of hope. Everybody can pass if they are courageous and patient. Life can be up and down, but we need to work all together hand in hand.”

In recent years the duo have toured with Coldplay and U2, performed at a Nobel Peace Price concert honoring Barack Obama, and played at the last two FIFA World Cup opening ceremonies. Last year they performed their first Eclipse show at the Manchester International Festival – staged entirely in the dark, the concert chronicled Amadou & Mariam’s life and work together.

“If you cannot see, your sense of sound becomes richer,” explains Bagayoko. “You appreciate the qualities of sound. That’s one reason I wanted to have a series of concerts in the darkness. I wanted the audiences to try to hear the music just as Mariam and I hear it.”

Originally from Portland, OR., Y La Bamba will open the eclectic stage. Beholding sounds that resonate a strong Mexican heritage, while pushing itself into the indie pop scene, the band draws inspiration from life itself.

Front-woman Luzelena Mendoza’s strict Catholic upbringing has shaped both her harmony and spirit. “We sing of the celebration of growth,” says Mendoza.

The band’s newest album “Court the Storm” is their second full-length release to date. The title track of the album features Neko Case, who asked the band to open for her on an East and West Coast tour. Case first heard the authentic sound at their label Tender Loving Empire in downtown Portland after Y La Bamba’s debut album “Lupon” dropped back in 2010.

The band’s prestige continues to grow, catching the ears of Los Lobos member Steve Berlin, who has offered to produce their next album.

“I am grateful that people support music,” says Mendoza. “We are always trying out new material, and plan to play a mix of both familiar tunes and some new ones as well.” Showtime is at 7 p.m. as usual.