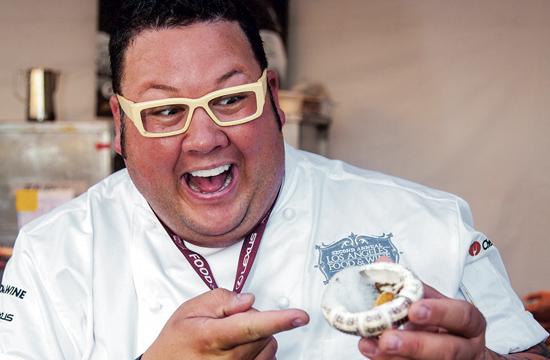 “I love California, I love LA, and I love Santa Monica and to be this close to the beach and be part of it is amazing,” Elliot said.

Festival-goers enjoyed wines, served with gourmet bites made by 18 chefs from Santa Monica and beyond.

Elliot said his tasting item was about bringing the beach to your mouth.

“What we’re calling it is the Edible Pacific,” Elliot said. “You have a sea urchin shell filled with edible sand as well as tuna, Dungeness crab, sea urchin, seaweed, and ocean froth on top.”

He spoke about food and how it is prepared differently in various parts of the country.

“In Chicago, it’s very much driven towards artistry and technique where in California it’s based on minimalism and letting the ingredients speak for themselves. You are seeing a lot of farm-to-table which is more I guess ecologically and environmentally they both make a lot of sense trying to help people around you and use things at their peak, so all of that is making food better for everybody.”

The Chicago-based chef said he still spends a good amount of time in the Windy City.

“I’m always running around trying to explore and do different events and I’m hoping to open something out here in LA,” he said. “This is really a place I love to be.”

He said two of his favorite Santa Monica restaurants were Blue Plate Oysterette and FIG inside the Fairmont.

When asked about “MasterChef,” he didn’t give too much away saying the finale would be aired on Sept. 10.

“It’s going to be really exciting,” he said. “The numbers have been huge and we’re going to do season four.”

SMCVB CEO Misti Kerns said she was delighted with the evening.

“We’re at a wonderful hotel and property and we’ve got amazing chefs here tonight from all over Los Angeles and we’re of course partial to those that are from Santa Monica,” Kerns said. “The lucky part for us is that we’re known for being innovative and diverse and I think that our palette with our chefs delivers that.”

Chamber president Laurel Rosen said the energy at the event was fabulous.

“People are just excited to be here,” Rosen said. “The chefs are excited. It’s something really special – I can’t tell you exactly what it is, but there’s something special going on tonight.”

Ray Garcia, of FIG restaurant, said it was a fun culinary event.

“It’s an organized chaos today,” Garcia said. “We like to keep it interesting in the kitchen and now the guests get to see a glimpse of the chefs running around in front of you.”

While “Summer at the Shore” was taking place on the grounds in front of the Fairmont, the event “Indulge” took place inside at FIG restaurant.

Joining Garcia in the kitchen were renowned local chefs Josiah Citrin of Melisse, Raphael Lunetta of Jiraffe, and Joe Miller of Bar Pinxto.

The four chefs created a distinct dinner that featured the best of Santa Monica’s local produce and paired with a distinct collection of wines from California and beyond.