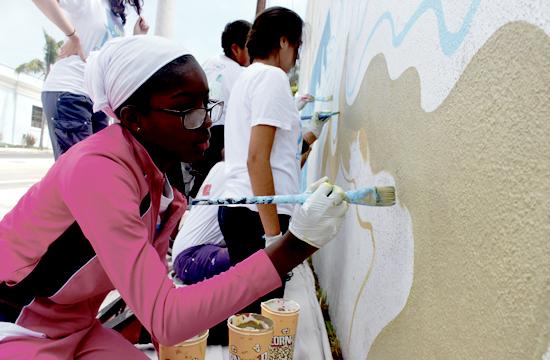 On the corner of Ocean Park and Main Street, a formerly whitewashed wall is beginning to regain the community spirit of its eventually graffitied predecessor, muralist Jane Golden’s “Ocean Park Pier.”

Local artist Kristel Lerman and members of Inside Out Community Arts are bringing art back to the wall.

Earlier this week when they were using the sidewalk as a makeshift studio someone shouted at them with support from their car.

‘That’s so cool!’ The person smiles and waves before they continue driving toward the ocean.

“We get that a lot, it’s so funny. It’s really fun to see a mural this big come to life,” Varina Bleil, Inside Out’s executive director of education, said.

The work-in-progress is a collaboration between Lerman, nonprofit arts organization Inside Out, ZJ Boarding House who leases the building that contains the wall, and global marketing and communications agency SelectNY, who is funding the project.

The wall’s revival has been a long process that began when Golden’s original mural depicting faceless figures walking the Ocean Park Pier during the 1920s endured excessive graffiti. After much debate and written permission from Golden to ZJ Boarding House to paint over the mural, plans to create a new mural moved forward.

Inside Out, an organization that transforms the lives of youth in underserved communities through arts and media education, has used the mural to integrate their educational program with visual art.

“Because of SelectNY making it possible for this mural to happen, we evolved our summer program into researching and exploring the themes of ‘Magic and Logic’ in really creative ways,” Bleil said. “We did a photography outing, we’ve done theatrical skits, they’ve done lots of painting. They learned a lot about California state standards and visual arts.”

Lerman and the Inside Out children, who are all middle school aged, have researched and collaborated together to create a mural that borrows themes and stories of the Chumash people, a Native American people who historically inhabited southern coastal regions of California. Lerman and the Inside Out group visited a Chumash Indian site to learn about their philosophies and culture.

“This is their moment to be able to say something to their community, which is why there’s so much about protecting their environment, and why to them, ‘Magic with Logic’ is how the Chumash spoke to them about how they honor their ancestry,” Bleil said. “They honor their culture and traditions, but they also have a very forward-thinking way of promoting their intense investment in marine ecology and environmental issues.”

Lerman said the mural has evolved through discussion with her young helpers.

“We’ve all kind of gone through this research project together as a team. The mural is a collaboration. I had my own vision…and then I let them have their own ideas and creations from the research. We all had very similar visions,” Lerman said.

Lerman said that she helped the kids transform their initial literal ideas in creative ways. “This whole mural is very dream-like. Its not a literal mural, its something that you walk by and you’re fascinated by, and you’re like, “wow”, and it makes you feel,” Lerman said.

Luis Cortez, a 13-year-old participant of the Inside Out program, said he enjoyed the group process.

“I learned when doing a mural, it’s better to work in a group. You get better ideas and more opinions,” Cortez said.

He also said that while he sometimes got nervous at all the people who watched as they painted the wall, he focused on his task and his vision for the mural.

“I see the mural as representing different elements of Santa Monica, the Chumash Indians, and the environment,” he said.

Lerman, whom this mural has been a passion project for several years, said she hoped the art will be finished within the next couple of weeks.

“This big white wall has kind of been a hurdle to get over, a mountain to climb – there’s a million analogies,” Lerman said. “But I say that together as a team we will conquer this white wall and turn it into a beautiful piece of art.”