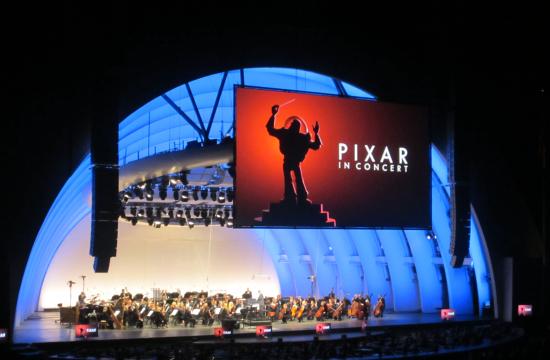 With 13 films under its belt that have collected dozens of awards, it was the perfect combination for Pixar to team up with the Hollywood Bowl Orchestra this past weekend to present “Pixar in Concert.”

About 10 minutes from each film was selected and played on the Hollywood Bowl’s big screens while the Orchestra performed the memorable scores to the clips on Friday, Saturday, and Sunday night.

The films were the Toy Story trilogy, A Bug’s Life, Cars and its sequel Cars 2, Finding Nemo, Monsters, Inc., The Incredibles, Ratatouille, WALL•E, Up, and the latest box-office hit Brave.

Hollywood Bowl Orchestra conduct Thomas Wilkins spoke between most of the clips, saying he was genuinely excited to present the “Pixar in Concert” performances.

“Pixar is not just in the business of making movies; they are in the business of trying to make us better human beings,” Wilkins said. “I met some great people from Pixar this week and it’s been a great joy to have them around. They use like word like ‘tireless,’ and ‘detail,’ and ‘detail-orientated.’ They also use words like ’emotion’ and they use words like ‘life lessons.’ These people changed the game of animation, not just from the technical standpoint, but also from a storytelling point.”

He said Pixar will be the first to say that one of the most essential ingredients to telling a story is the music.

He also said Pixar was smart to connect with the four composers who have worked on its 13 films: Randy Newman, Thomas Newman, Michael Giacchino, and Patrick Boyle.

“What happens with their music is that it allows you to feel deeper about what it is we are watching on the screen,” he said. “That’s really what tonight is about.”

Pixar’s Pete Docter, the driving force behind “Pixar in Concert,” selected most of the riveting musical moments from the films for the series.