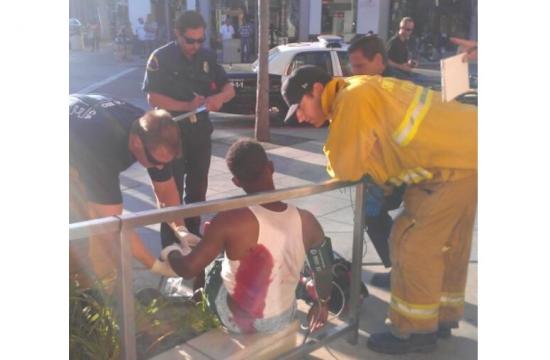 A 19-year-old teenager is in stable condition this morning after receiving several stab wounds from a random attack while waiting for a bus near the Third Street Promenade on Monday evening.

Santa Monica police received reports of the stabbing via 911 calls at 6:18 p.m. at a bus stop located on Santa Monica Boulevard at 4th Street.

“The victim and his girlfriend were exiting a restaurant and they had walked to a bus stop when he was attacked by the suspect who he had never seen before,” Lewis told The Mirror. “Everything else is under investigation at this point such as the motive, we’re working on that.”

Lewis said there were a large number of witnesses. He said SMPD detectives would examine camera footage this morning.

Lewis said the suspect is described as either white, Hispanic, or native American in his late 30s or late 40s, approximately 5’8”, 190 pounds with short black hair and brown eyes. Witnesses report that he was wearing a black hat, white shirt, beige cargo shorts, and white shoes.

Lewis said the victim was in stable condition.

“His injuries are determined to be non life threatening,” Lewis said. “He received several stab wounds and one large laceration.”

The 1400 block of 4th Street was shut down immediately after the incident. It reopened at 8:30 p.m.

The suspect is still at large. The knife used in the attack was not recovered.