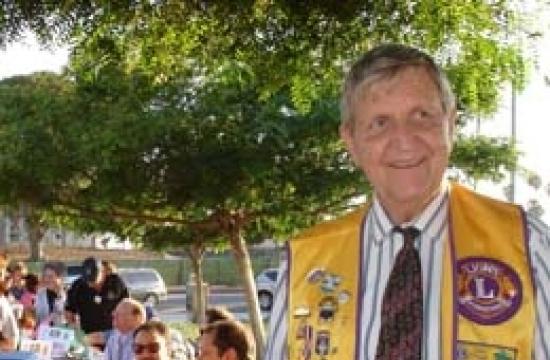 I feel so lucky to have known Frank. I will miss him and his friendship. He was decent, honorable, kind, honest, thoughtful, and caring. I remember the ease of working on the Recreation and Parks Commission with him and I remember the good work we did together.

His life was all about making the world, and especially Santa Monica, a better place.

After his 1955 graduation from the University of Iowa with a degree in business he joined the Marine Corps where he served in Okinawa. He came to Santa Monica in 1962.

Frank began at the Boys and Girls Club of Santa Monica as a basketball coach and was a lifelong volunteer, working with the kids, planning programs and fundraising.

As a member of the their Congressional Relations Committee he traveled to Washington D.C. and lobbied for the successful passage of a $450 million appropriation to fund the world wide work of the Boys and Girls Clubs. He became of Member of the Board of Governor’s in 1986 and was the Chair of the Board from 2000 through 2002.

When his own children were in school, he joined the PTA, and became one the first men to be a PTA president, a position he was re-elected to for seven consecutive years.

He was a Member of the Desegregation Committee and District Title One Advisory Board for the Santa Monica Malibu Unified School District and the recipient of their Lifetime Achievement Award.

An athlete himself, he played college football at Iowa. Frank brought his love of sports with him to Santa Monica and served as a Board Member of Santa Monica Little League from1980 to1986, coaching the team to three Championships.

He was a Member and Chair of the Santa Monica Sports Advisory Council, an Executive Board Member of Santa Monica Youth Athletic Foundation and the Founder and President of International Youth Baseball Foundation, an organization that sponsored seven International Baseball exchanges with Japan and Mexico.

Appointed to the Santa Monica Recreation & Parks Commission in 1992, he served as chair of the Commission when the City’s first Recreation and Parks Master Plan was written.

He brought his enthusiasm for sports and his dedication to helping children and teenagers to the work of the Recreation and Parks Commission.

Barbara Stinchfield, the long time Director of Community and Cultural Services, remembering him said, “Frank gave more than a decade of service to our community as a member of the City’s Recreation and Parks Commission and for many years as its Chair. He reflected the best of what this community stands for. He was devoted to our youth and supported a multitude of youth activities. He never said a negative word about anyone or anything. I delighted in working with this most kind and wonderful member of the Santa Monica community.”

Frank died of cancer on July 31, 2012. His longtime friend, Councilmember Bob Holbrook, said, “Frank was a wonderful man and a great husband and father. He was devoted to helping his own kids in all of their activities and to coaching other kids who were lucky enough to be on his Little League teams. He was devoted to this community and set a example with his endless hours of volunteering for kids. He was my friend and I will always remember him.”

When he received the Bank of America “Local Heroes Award” Frank spoke to the audience about his father, who had been a U.S. Congressman from Iowa and a Republican voice against the war in Vietnam, “My father always said life is lived best with a smile and a helping hand. I just try to emulate my own father in my life.” Those of us who knew him knew he lived by his father’s creed.

Frank exemplified a respectful leadership that made the people who worked with him feel good about their contributions. He was a loyal friend, a dedicated participant in the life of the community and a loving husband, father and grandfather.

Our sympathies go to his wife, Gwen, and his sons, Robert, Kris and Kurt, to all of his family and to all who will miss him.

The family of Frank Schwengel has established a scholarship in his honor. Donations may be made to: The Boys & Girls Clubs of Santa Monica  Schwengel Scholarship Fund 1220 Lincoln Blvd. , Santa Monica, CA 90401.