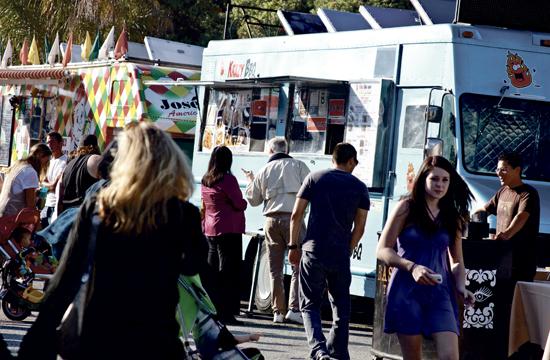 The last time food trucks were allowed to operate on the corner of Santa Monica Boulevard and 14th Street, there were secondhand reports that as many as 1,200 visitors patronized the unique eateries that have become so common in and around Southern California. That was in January 2010.

Now we are in the dog days of Summer 2012, but food aficionados certainly have reason to be excited about the prospects of dining at that same corner again as the first-ever city approved all day private food truck lot opens this Wednesday, Aug. 8.

Entertainment will also be available in the form of music by The Central, a “social aid and pleasure club,” from noon to 9 p.m. The music can be heard in the indoor seating portion of the lot, where beverages, both alcoholic and non-alcoholic, can be purchased.

“It will be a long time venue for the best food trucks of the city, bringing the local community a continuum of greats eats from diverse ethnicities and a fun place for all to hang out,” said Brian Spire, director of Hump Day Lot.

Food trucks have had an interesting history in Santa Monica, both at the Hump Day Lot site and at other locations near downtown and adjacent to Santa Monica Airport (SMO).

In June 2011, the council held a special meeting requesting staff to look into how best to allow food trucks service Santa Monica’s residents and workforce. The special meeting was convened in direct response food trucks lining up at the same corner where the new Hump Day Lot is located.

About 18 months prior to that meeting, City Hall had temporarily put a halt to food truck operations at 14th and Santa Monica, citing concerns of health regulations and safety. There were also some complaints filed at City Hall by local brick-and-mortar businesses, claiming they were losing a competitive advantage if food trucks were allowed to roam in Santa Monica.

Last November, the council approved an ordinance prohibiting food truck vending on Main Street between Marine Street and Ocean Park Boulevard between the hours of 1 a.m. and 3 a.m. on Saturdays and Sundays.

Other food trucks operate in the city, as well, including several that line up outside the Barker Hangar at SMO. There is also a Food Truck Tuesdays, held evenings at The Victorian (2612 Main Street) as well as at Bergamot Station.

City Hall became interested in food trucks in light of several issues, specifically potential zoning regulations on City-owned or private property. Ultimately, the city seemed interested in regulating food trucks just like any other business in town, such as placing location restrictions on operations, limiting the number of trucks within a location, governing patron capacity, and regulating signage. Other regulatory issues include noise impact, security, lighting, parking, and permits.