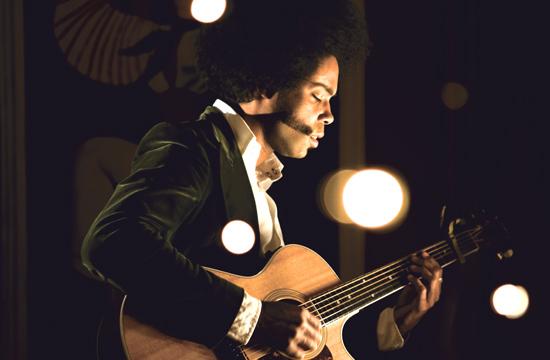 Alex Cuba will headline tonight, Aug. 23 with a sound that breaks most genres. Originally from Artemisa, Cuba, he has spent the past 13 years living in Smithers, B.C. With a style that musically crosses borders, the world is Cuba’s territory.

“The purpose of my music is to free people up, to free up musicians, to free up writers and composers, and creators in the world,” says Cuba. “Music, for me, is not one style. I’m not creating for one kind of person.”

With three albums to date and “Ruido En El Sistema / Static in the System” set to drop in October, Cuba continues to grow as a musician.

His second solo album “Agua Del Pozo” earned him a second Juno Award for Best World Music Album and launched the artist into a global spectrum. Nelly Furtado would be among his listeners, and invited Cuba to co-write nine tracks of her all-Spanish debut for Universal “Mi Plan.”

It was Cuba’s third album, which featured his first song in English that gained him credibility on American soil. “If You Give Me Love” received much praise from local radio, as well as a Latin Grammy for Best New Artist, and a couple of nods in other categories.

In anticipation for his newest album, Cuba hopes to bring an exciting atmosphere to the Pier. “My lyrics portray a message of peace, love, and all the good stuff in life,” he says.

Inspired from his own father Valentin Puentes’ strength to go back to school and receive a Masters in Music at the age of 55, Cuba remains humble and loyal to his calling.

“Concerts like this help maintain the appreciation for arts and keep culture alive,” he explains. “I love doing them because you are most likely to touch people that won’t normally go to see you in concert at a theater or even a club.”

The artist plans on sharing music that showcases his entire career, a sort of catch up for those who are new to his sound.

Unlocking the night, the stage will open with the music of Lucky 7 Mambo.

Though the group was unavailable for an interview, they claim to “bring to the West Coast the high energy sounds of the classic mambo, featuring the harmonies of the vibraphone.”

Composed of seven members with accolades across the board, Lucky 7’s accomplished poise is sure to persuade some hips.

Vibraphonist Craig Fundyga has recorded music for television shows like “Malcolm in the Middle” and “Friends,” along with many theatrical releases.

Vocalist George Balmaseda was born in Camaguey, Cuba, and has toured with the likes of Tito Puente, Celia Cruz, and La Lupe. His voice has been featured in TV, movies, and radio commercials in the States.

Percussionist Joey De Leon, Jr. graduated from the Manhattan School of Music with a B.M. in classical percussion. He has performed with greats like Dave Valentin, Roland Vasquez, Tupac Shakur, and the list continues.

Bassist Rene Camacho, Percussionists Kevin Ricard and Angel Rodriquez, and Pianist Joe Rotundi sound up the seven-man ensemble with their own long lists of endeavors.

Incorporating English and Spanish lyrics into their music, the group serves up memories of the “good ol’ days” and latin pride.