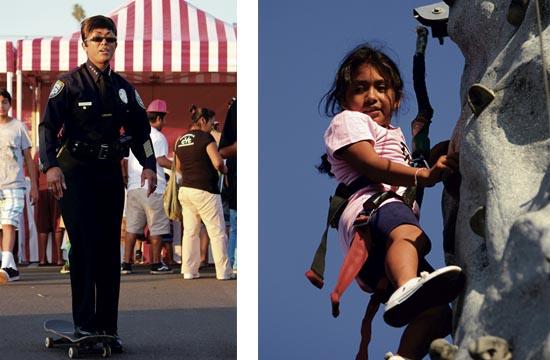 National Night Out, an annual event sponsored by the Santa Monica Police Department, was celebrated in style Tuesday night in a highly successful event that included child fingerprinting, free food, rock climbing, instructional booths, and a youth rock band in order to promote partnership between the police and the Santa Monica community.

“This night allows us to have central themes that we can communicate to our community particularly in the case about pedestrian safety, the perils of distracted driving, and about the activities that we do daily,” said Santa Monica Police Chief Jacqueline Seabrooks. “Sometimes we take that for granted and this has life altering consequences for other people.”

Firefighters and police officers served free hot dogs and pizza to the members of the community who attended, and at one point in the evening, Seabrooks was spotted riding on a skateboard.

Seabrooks said National Night Out was an “opportunity for us emphasize that message in a very positive way that promotes a sense of unity in our community.”

“What we try to do is bring something to everyone so while the adults may be talking about distracted driving, pedestrian safety and bicycle safety, the youngsters have an opportunity to learn about rock climbing in a safe environment,” Seabrooks said. “They get to interact with police officers and our horses and everything and at the same time it’s fun.”

Tim the Bubbleman was on hand with his bubble making machine that was set up next to a mobile climbing wall that towered in the center of the event and children crowded around waiting for their turn to attempt reaching a buzzer at the top.

The Santa Monica SWAT team opened up their Humvee to curious children who were afforded the opportunity to climb inside while adults were shown some of the weapons used to protect the community during a crisis.

A DJ was on hand spinning tunes throughout the evening and The Bad Boys, a youth band led by nine-year-old guitarist and lead singer Jaxon Buzzell, provided the entertainment on the main stage. Meanwhile, McGruff the crime dog patrolled the crowd interacting with children.

Lisa Jackson, a SMPD Forensic Specialist, was also on hand at the event to fingerprint children and make parents aware of ways to protect their children.

“Hopefully you will never need it but if your child goes missing you will have their DNA and their hair samples on record,” Jackson said.

Jackson’s identikit contained the ink used in fingerprinting and also consisted of a swab envelope with two swabs to keep the DNA from their child on record. An envelope to collect hair samples was also passed out.

A mounted patrol unit was also selling t-shirts with proceeds going to support the maintenance of their horses.

Another highlight was the raffle with prizes from gift certificates to cameras. Santa Monica resident Garland Allen won a hands free blue tooth headset in the raffle.

“Now I can speak on the telephone inside of my car without getting a $160 ticket,” Allen said.