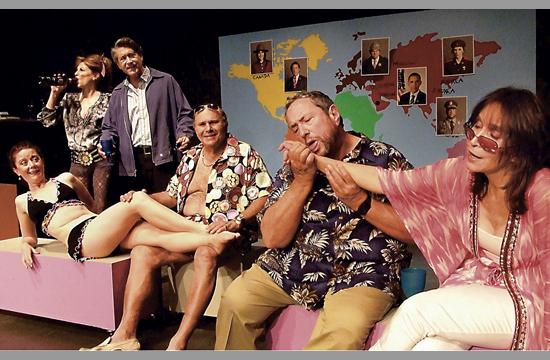 The plot of this tasty theatrical morsel, written by Peter Lefcourt and well directed by his wife Terri Hanauer, who keeps the action moving at break-neck speed, is a familiar one – man cheats on the wife of his best friend, gets caught by another friend who, let’s say is always looking to save a dime and drives to the Valley to get a lube job and unexpectedly comes upon two cheating hearts.

And now, for some details. Murray, wonderfully played by Bobby Costanzo, is having an afternoon tryst with Eve, played with crack comic timing by Brynn Thayer, at La Casa de Pepe, a Mexican joint in Canoga Park where Westsiders seldom, if ever, venture. It seemed like a safe place to cuddle and coo but lo and behold, their friend Arnie, masterfully played by Kip Gilman, decides to kill time by having a Margarita while his car is being serviced and shock of shock, he encounters his two friends, sans their respective spouses. Concerned that Arnie might blow her cover, Eve leaves a threatening message on his voice mail using a biblical reference about who should be tossing out the first stone, alluding to the fact that she had some kind of goods on him. With its unending string of twists and hilarious turns and devious behavior, what ensues could loosely be described as a French bedroom farce without the slamming of doors.

Now Herb, the cuckolded husband of Eve, wonderfully played by Stuart Pankin who captures his character’s broad range of comic emotions, is suspicious that his wife might be cheating, but confesses, “I want to know, and I don’t want to know.”

Eventually, he concludes that his friend is the culprit, but it’s the wrong friend and as is the case with farce, all hell is about to break out. Herb decides to have lunch with the wife of the accused to fish around for confirmation and the scene between Herb and Arnie’s wife Carol, superbly played by Gina Hecht, is hilarious as Herb stumbles through by using a hypothetical cheating situation. Carol has no idea what he’s talking about.

In the meantime, Herb’s little sexpot of a wife Myrna, delightfully played by Gwendolyn Druyor, adds a touch of innocence to the devious behavior exhibited by most of the characters.

Lefcourt uses a tried and true theatrical device of breaking the fourth wall by having Kip Gilman’s Arnie serve as moderator of the shenanigans which he does extremely well, capturing the mood and tone of the narrative. The only blip is asking the audience to look at photos in the program that immediately destroys the fantasy journey that the audience has been invited to take.

Anyway, using the Cold War as a metaphor as the ensuing couples go to war, a large map is on the upstage wall with various countries outlined such as Canada, North Korea, South Korea, Uzbekistan, etc., and as the play progresses, photos of the characters are affixed to a country.

Special praise must go to a most talented Michael Caldwell who plays multiple roles such as the waiter in the Mexican restaurant, an aging butler, and in a very funny scene, the rather sadistic technician who is getting ready to administer a bikini wax to Carol and Myrna.

The production values are clever as the set design by Celine Diano that consists of modular pieces on rollers that double as tables, chairs, desks, etc., and are positioned at the beginning of a scene by the actors and then replaced at the end of that particular scene. The lighting design by Michael Gend nicely complements the action.

Director Hanauer’s dynamite cast, coupled with a clever script, makes for a light-hearted evening of theatre and in the words of the Bard, “All’s Well That End’s Well” or a mutually assured evening of enjoyment.