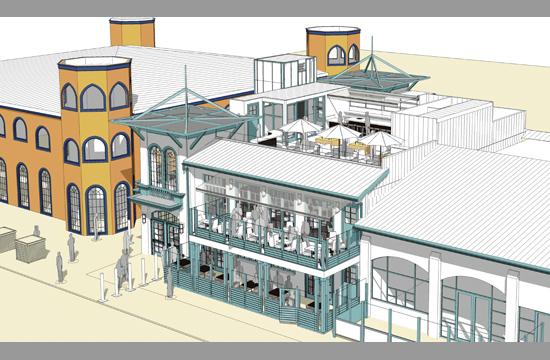 Diners seeking a nice meal out at the Santa Monica Pier may soon have the option to enjoy their food on a rooftop deck while taking in an elevated view of the Pacific Ocean, as Planning Commissioners discussed Wednesday night the merits of allowing a new restaurant to include rooftop dining.

Romana Pier LLC is building a new restaurant on the pier and hopes City Hall would be amenable to amending the Municipal Code to allow for customer access to a third floor. If ultimately approved by the City Council, the code amendment would “allow roof top structures that constitute a third story if they support roof deck dining.”

One hurdle was cleared Aug. 15, when Planning Commissioners unanimously extended its support of a proposed text amendment that would allow the planned rooftop dining deck to be considered by the City Council for adoption.

According to City staff, the new restaurant would be built inside the already existing Billiards Building on the pier, a space that was previously used as a cabaret and restaurant. Submitted plans indicate the current structure would be altered to allow for a raised first floor ceiling height, an expanded mezzanine “to create a full second floor,” and the addition of a roof deck for outdoor dining and ocean views.

As it currently stands, the Municipal Code places a maximum story limit on all commercial property located on the pier. The maximum allowable height for buildings in the pier’s zoning district is 30 feet.

One example is Mariasol, the Mexican restaurant at the end of the pier that already is at the height restriction and cannot expand its structure upward.

Still, City staff pointed out that the potential addition of rooftop dining on the pier would enhance the overall experience of visiting Santa Monica most iconic destination.

If the proposed amendment is successful, pier buildings could be allowed to add a third floor to its respective structures.

If third floor roof top dining is allowed, the area dedicated to that dining space would not be allowed to exceed 25 percent of the total roof area. Further, the total building height cannot “exceed the maximum height of the district,” according to the proposed text amendment.

According to City staff, “the proposed amendment is consistent in principle with the goals, objectives, policies, land uses and programs specified in the adopted General Plan” as well as with the Land Use and Circulation Element (LUCE).

The David Hibbert Architects team presented a proposed roof deck layout to commissioners. According to that proposed layout, the total building roof area is 11,461 square feet and includes space above Rusty’s and Santa Monica Pier Seafood.

During the discussion between commissioners and applicant, both Ted Winterer and Richard McKinnon expressed concern that some of the rooftop views of the ocean would potentially be blocked by a raised stairwell that already exists and a planned bar and restroom area.

Only one member of the public – Jerry Rubin – spoke on the proposed project during the public hearing.

The Landmarks Commission still needs to review the final plans.