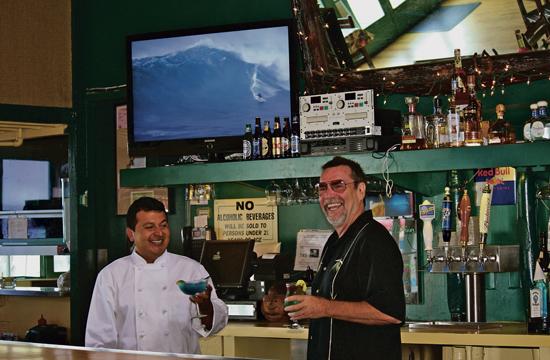 Burgers and sandwiches or a gastro-bistro themed menu designed by a Top Chef master – what will be versus what could have been at one of the most popular locations on the Santa Monica pier.

Council members last week approved a 10-year lease extension for Rusty’s Surf Ranch, ensuring the pier mainstay will remain at the tourist destination for another decade serving its daily fare of burgers, sandwiches, soups, and salads.

The other option: allow a restaurant operator with eateries in Hollywood, Sherman Oaks, and Studio City replace Rusty’s with a new dining experience, complete with live entertainment, a sports bar, and a menu created by Top Chef’s Antonia Lofaso.

The popular pier eatery, which occupies more than 4,300 square feet of the Billiards Building, was established in 1994 and is on the verge of completing a 20-year lease. That lease was set to expire Sept. 30, 2014.

Interestingly enough, the expiration of the lease in 2014 does not necessarily open up the possibility of extension or renewal.

According to City staff: “Under the Leasing Guidelines, lease renewals or options to extend the terms of occupancy are not offered to existing tenants upon expiration of agreements.”

“If Rusty’s was selected following a competitive public process, a new lease would be negotiated. If not selected, Rusty’s agreed to consent to an early termination of its lease,” City staff continued.

Indeed, Rusty’s was one of eight applicants to submit a Request for Proposal (RFP) prior to the October 2011 deadline; the competition was whittled down to two – Rusty’s and an unnamed restaurant to be operated by The Quintessential Group.

The RFP required that the applicants demonstrate “the preferred use for the leasehold was for a lunch and dinner restaurant with alcohol service, evening music, and entertainment” and “that the proposed exterior and interior presentation of the space should contribute to the Pier’s festive ambience and vitality, enhance the current offerings available on the Pier and appeal to both visitors and locals.”

Even more, Rusty’s agreed to pay six percent of gross revenues calculated after its breaking even point of $2.3 million in excess of base rent. The Quintessential Group had yet to negotiate the percentage rent amount.

If The Quintessential Group were permitted to take over in place of Rusty’s, it would have agreed to a 10-year lease with two five-year options and have architect Gino Piano, who designed the Shores Hotel on Lake Geneva northwest of Chicago, oversee the design of the new restaurant.

According to City staff, both restaurant operators had deal breakers that would have allowed them to walk away from any agreement. Rusty’s would not agree to a $200,000 base rent if it were not allowed to construct second floor seating, while The Quintessential Group stated it would walk away from any deal if it failed to secure a Conditional Use Permit to sell alcohol for an onsite bar or nightclub.

Located in the Billiards Building at 256 Santa Monica Pier, Rusty’s also shares space with the Santa Monica Seafood Company and Al Mare, a new eatery that is currently under construction and plans to open in the fall.