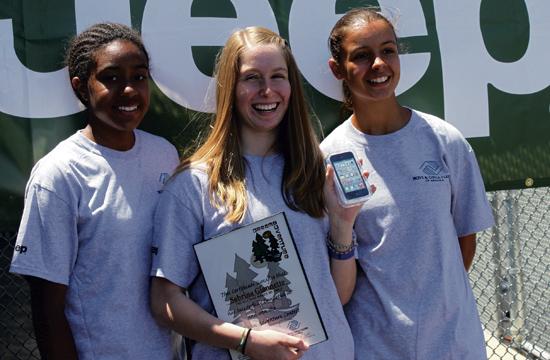 For several hours last week, the outdoor area surrounding the Boys and Girls Club’s JAMS Clubhouse was transformed into veritable super-playground, complete with an elaborate waterslide, a rock wall made of fake palm trees, a karaoke booth, and a version of a bowling lane.

It was all part of a national prize awarded to 14-year-old Boys and Girls Club member Sabrina Giannette by Jeep.

The contest, which chose eight winners from four million entrants aged six to 18, called for applicants in Giannette’s age group to submit a 60-second video describing their ultimate “Dream Adventure,” in response to the prompt, “What would you do in this big world if you could do anything you wanted?”

Giannette’s video, titled “The Isle That Makes Me Smile,” depicted a daydreamed trip to the Galapagos, and contained a stop-motion sequence and a ‘giraffe.’

Giannette, who worked as a team with her friends and fellow Boys and Girls Club members Brittney Kinnear, 13, and Hilaria Vanputten, 14, as well as staff member Jesus Gonzalaz, said much of the process of creating the video came organically.

“Well, on Halloween, the giraffe (played by staff member Wade Moody) in the video dressed like a giraffe,” Giannette said. “So, that’s the first thing that came to mind, and we were like, ‘how can we use animals, and change the staff into some sort of animal or castaway or something that has to do with an island?’ So that’s sort of where it came from.”

The team, through research that Gonzalaz did initially, learned how to use and worked on Adobe’s Premiere Pro, which was provided by the Club. They also took advantage of the club’s sound studio, as well as learning from a pre-existing stop animation club and commissioning clay sea animals from their peers. The stop motion sequence in the video took more than 200 pictures and used clay to create an underwater scene.

Since the Clubhouse opened their first year at JAMS, the three girls are part of the first class to graduate having had three years at the Club under their belt.

“It’s just been great over here. Everything… each year it just seems like it’s getting better and better. Like, everything. I love it here,” Giannette said.