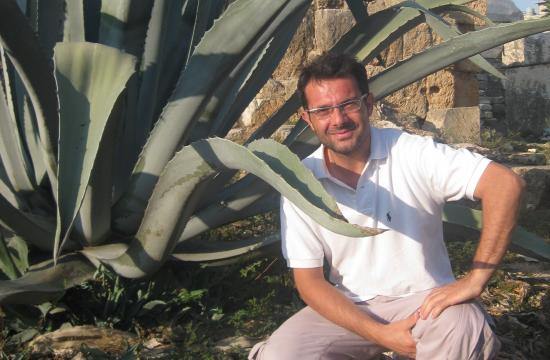 Santa Monica College, for the first time, will host a Visiting Scholar in 2012-13 through the prestigious Fulbright Program – Dr. Paolo Torresan, a renowned Italian language professor whose teaching methods and innovations have kept him in demand as a scholar throughout the world.

The Fulbright Scholar-in-Residence will not only teach classes at SMC, he will be tapped for a wide variety of activities, including conducting workshops for faculty, advising students, and helping organize cultural events, both at the college and in the larger Southern California community.

“This is a great honor and exciting development that SMC will have such a distinguished Fulbright scholar on our campus in the coming academic year,” said Dr. Toni Trives, chair of the SMC Modern Languages and Cultures Department. “We look forward to having Dr. Torresan teach in our department and provide professional development training for our faculty. Thanks to the Fulbright office, our students, faculty and community will benefit from Dr. Torresan’s expertise.”

Torresan, who has a tenured teaching position at Ca’ Foscari University in Venice but is currently a Visiting Scholar in Linguistics at Lancaster University in England, joins a U.S. government program with a roster of distinguished alumni, 43 of whom have won Nobel Prizes and 81 of whom have received Pulitzer Prizes.

“Knowing what Dr. Torresan has done and also having seen him in the classroom, I am very excited to have a world-class methodologist join our faculty and contribute to the expansion of our program at a time when student demand is peaking but the existing resources would have otherwise not permitted such growth,” said SMC Italian professor Dr. Aned Muñiz, who was instrumental in bringing Torresan to the college.

Torresan will not only teach two Italian classes in each of the fall and spring semesters, he will play a key role in SMC’s Global Citizenship Initiative and bring his expertise to professors, students and the community. His activities will include:

• Assisting the Modern Language Department with innovative ideas and teaching methods, suggested course and language lab materials and resources, and development of a fourth semester of Italian (Italian 4).

• Helping SMC develop formal relationships and programming with Italian educational institutions for the benefit of both students and professors, including faculty and student exchanges and study abroad experiences.

• Guest lecturing in other SMC courses, such as education, comparative religion, literature and English-as-a-Second-Language.

• Serving as a faculty resource for international students (particularly those from Italy), the SMC Italian Club, and local organizations such as the Santa Monica Sister City Association, Fondazione Italia and the Instituto di Cultura Los Angeles.

• Assisting with the development and implementation of events and activities on campus and in the community, including an Italian Film Festival, teacher training courses, and keynote addresses at neighboring institutions of higher education such as UCLA.

• Collaborating with colleagues from the SMC Art, Music and Fashion departments to present a day of lectures on Italian culture.

At the same time, Torresan will pursue his research interests while at SMC and will have an opportunity to attend modern language conferences in the United States.

Torresan, who has his Ph.D. in linguistics and romance philology from Ca’ Foscari University in Venice, has been a visiting scholar and professor throughout the world, including the United Kingdom, Brazil and Spain. He has also taught Italian language and culture and trained teachers in Italian as a Foreign Language throughout the world. He is also a researcher and published author.

He is one of approximately 850 outstanding foreign faculty and professionals who will teach and/or research in the United States through the Fulbright Visiting Scholar Program in 2012-13. The Fulbright Scholar-in-Residence Program brings scholars and professionals from abroad to U.S. colleges and universities to significantly internationalize campuses and curricula.

The Fulbright Program is the flagship international educational exchange program sponsored by the U.S. government and is designed to increase mutual understanding between the people of the United States and the people of other countries. The primary source of funding for the Fulbright Program is an annual appropriation made by the U.S. Congress to the U.S. Department of State, Bureau of Educational and Cultural Affairs. Participating governments and host institutions, corporations and foundations in foreign countries and in the United States also provide direct and indirect support.

Recipients of Fulbright grants are selected on the basis of academic or professional achievement, as well as demonstrated leadership potential in their fields. The program operates in more than 155 countries worldwide.

Since its establishment in 1946 under legislation introduced by the late U.S. Senator J. William Fulbright of Arkansas, the Fulbright Program has given approximately 310,000 students, scholars, teachers, artists, and scientists the opportunity to study, teach and conduct research, exchange ideas and contribute to finding solutions to shared international concerns.

Fulbright alumni have achieved distinction in government, science, the arts, business, philanthropy, education, and athletics. Forty-three Fulbright alumni from 11 countries have been awarded the Nobel Prize, and 81 alumni have received Pulitzer Prizes.

Fulbright recipients are among more than 40,000 individuals participating in U.S. Department of State exchange programs each year. For more than 60 years, the Bureau of Educational and Cultural Affairs has funded and supported programs that seek to promote mutual understanding and respect between the people of the United States and the people of other countries. The Fulbright U.S. Scholar Program is administered by the Council for International Exchange of Scholars, a division of the Institute of International Education.

For further information about the Fulbright Program or the U.S. Department of State’s Bureau of Educational and Cultural Affairs, please visit the website at http://fulbright.state.gov or contact James A. Lawrence, Office of Academic Exchange Programs, telephone 202-632-3241 or e-mail fulbright@state.gov.