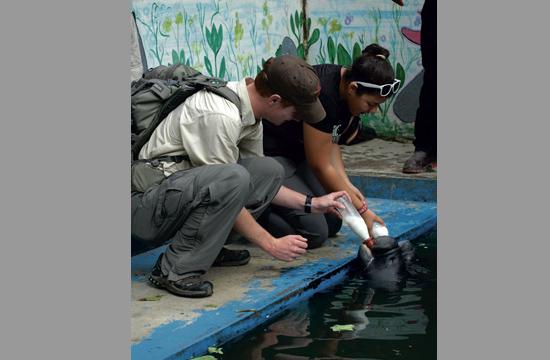 “I heard a rattle in the bush. I didn’t think it was anything until I turned my head and there was an anaconda in my face. We were eye-to-eye. His head was either the size of my head or bigger. I was petrified. I didn’t move, I was just amazed,” Pina said.

Pina’s anaconda encounter was one of many new things she experienced as part of the Greater Los Angeles Zoo Association’s Duttenhaver Animal Conservation Field Study program, where she was one of seven teenagers and three adult mentors to travel to Peru to conduct research in late July.

Based aboard the Ayapua, a restored and remodeled vessel from the Rubber Boom era, the teenagers helped survey river dolphins, macaws, caimans, monkeys, other mammals, large forest birds, and fish to determine the success of conservation and the impact of global climate change in the Amazon basin.

Using a motorized canoe, they rotated tasks like conducting surveys, searching for caimans at night with a spotlight, and meeting local people to talk about their fishing, hunting, and conservation efforts. The data they helped collect will be used in the continued development of field-based courses to help demonstrate the need for community-based conservation and wildlife research.

For Pina, the program was another step in furthering her lifelong passion for animals.

She grew up around the animals on her dad’s ranch enjoying the dogs, horses, cows, and pigs.

“Instead of watching cartoons as a kid, I would watch animal planet on a daily basis,” Pina said.

Before she applied for the program, Pina had been volunteering for the LA Zoo for a year, where she helped in the LAIR, the area for Living Amphibians, Invertebrates, and Reptiles. She normally helped clean and prepare food for the animals, but said she also recently got to experience and help out at a charity event where she had fun giving actress Sarah Michelle Gellar a tour of the ‘LAIR.’

Her trip to Peru was less a little less glamorous, although Pina said she experienced so many new and incredible things.

“It was a big culture-shock when I went there,” Pina said, referring to the Pacaya- Samiria National Reserve where they were located.

In her short time there, Pina said that she formed friendships with the people she met there, and said that their group was completely welcomed by the locals into their homes, and into their town.

Pina said she was in awe of her surroundings the entire time.

“It was so beautiful. Just seeing trees everywhere, and the sky was so clear. We have a very pretty sunset here (in Santa Monica), but it’s because of the smog. But there, when we were on the river, the sun was going down and it was just like red and orange. Everything…it was like everything was on fire.”

For Pina, one of the highlights of the trip was going to a manatee reserve.

“We got to see baby manatee’s and pet them and feed them with bottles,” she said. “They’re very soft, it was the cutest thing ever.”

Pina said that she hopes to become an animal behaviorist, and do more field research like she did in Peru.

“The experience just totally made me realize that this is what I want to do. I would love to do this for the rest of my life,” Pina said.