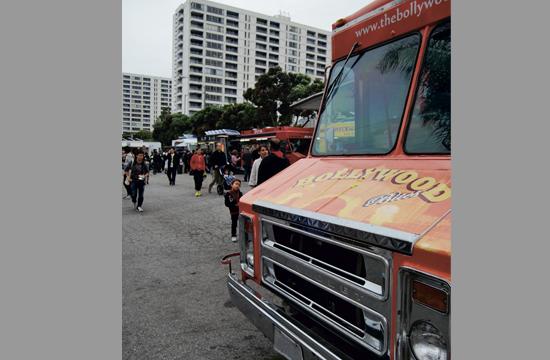 It has been the year of altering zoning codes to allow food trucks greater range to operate within Santa Monica. Only weeks after the City Council discussed food trucks operating on a lot near Santa Monica Boulevard and 14th Street, Planning Commissioners voted last week to recommended as many as four more other locations primed to house mobile eateries.

The 5-2 vote took place Aug. 22 and merely indicated an overall support of a new policy to allow food trucks to operate weekly on Main Street, Lincoln Boulevard, Pico Boulevard, and Santa Monica Boulevard. It is now up to council members to make the Planning Commission recommendation official city policy.

At the four locations, food trucks would be permitted to operate on a lot instead of parking along the street, similar to the food truck events at the California Heritage Museum or 1401 Santa Monica Boulevard.

Per the recommendation, food trucks would be allowed to operate weekly from 5 p.m. to 10 p.m. on Main Street. Meanwhile, food trucks seeking to operate once a week on the other approved locations on Lincoln, Pico, or Santa Monica would be permitted to serve food between 8 a.m. and 11 p.m.

“In order to keep food truck venues as a re-occurring special event, staff recommends that no food truck venue operate more than three days per week or before 8 a.m. or after 11 p.m., including set-up and clean-up,” City staff said. “The days and hours of operation of individual food truck venues within these limitations shall be determined on a case-by-case basis.”

If ultimately adopted by the council, the zoning amendment would require certain minimum parameters for a food truck park to operate.

The events must also provide sufficient restroom access and a seating area that is serviceable but not too large, according to a City staff recommendation.

“A maximum 200 square foot seating area may be provided and must be removed prior to closure of the food truck venue for the day,” City staff said, further recommending “the 200 square foot maximum to ensure that the outdoor dining activities do not become a significant gathering area that could generate noise that could disrupt the adjacent neighborhood.”

City staff also pointed out the proposed zoning amendment is consistent with the mission of the Land Use and Circulation Element (LUCE).

“The LUCE states that Main Street should accommodate a variety of commercial uses that provide daily necessities for those living in the surrounding community, tourists and the greater Santa Monica area and off-street food truck venues provide a variety of inexpensive food options for the entire community,” City staff said.

“In addition, the LUCE states that businesses and activities on Main Street that provide a distinctive experience such as the California Heritage Museum, community gardens and the farmer’s market should be supported and off-street food truck venues on Main Street would be consistent with this policy in that they are themselves a unique experience that increases pedestrian traffic in the area.”

It was that unique experience that some of the commissioners believed were a major reason to allow more food trucks to operate within Santa Monica.

While commissioners acknowledged the vibrancy and sense of community that were associated with food trucks, there were also concerns, such as whether to limit food truck operation in major business districts such as Main Street, where an already saturated marketplace exists brick-and-mortar restaurants competing against each other.

During public comment, there were business representatives who indeed expressed concern of how food trucks may negatively impact the revenues of surrounding brick-and-mortar eateries.

In the staff report submitted to commissioners prior to the meeting, City Hall pointed out that council members also expressed concern about permitting.

McKinnon wanted to explore ways to better integrate each of the food truck events.