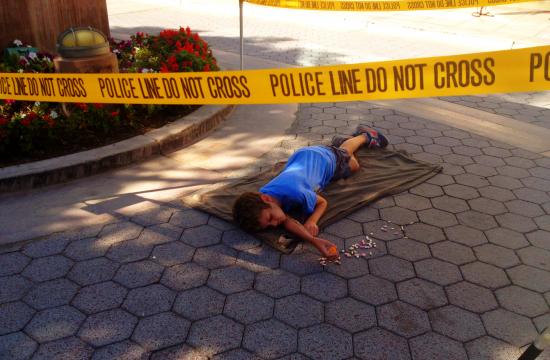 Expressions of shock, confusion, and fear painted the faces of visitors to Santa Monica’s Third Street Promenade on Saturday as a demonstration depicted a chilling scene involving a pre-teen who had become deathly ill after abusing prescription medication.

The prescription drug abuse reenactment was presented by The Locking Cap, which is a combination-locking lid for Rx bottles.

Bright caution tape encircled the child who lay on the ground, pale and unconscious while holding an uncapped medication bottle.

“2,500 kids will abuse Rx drugs for the first time today” was written across the child’s arm, and prescription pills were scattered around the body which clearly portrayed a possible Rx overdose or adverse reaction.

Though many were disturbed, the demonstration was not meant to offend, but to create buzz around adolescent prescription medication abuse — a rising epidemic that has been overlooked by the general public.

According to educational packets handed out at the event, three million American teenagers will become new prescription drug abusers this year alone.

“However, thousands of children and teenagers may not be as lucky,” Simpson said. “If this demonstration teaches anything, it is that preventative measures must be taken to stop this epidemic from escalating, and if it saves even one child’s life it was successful.”

Here is a YouTube video of Saturday’s demonstration: http://www.youtube.com/watch?v=Q82DrhmnvVQ.