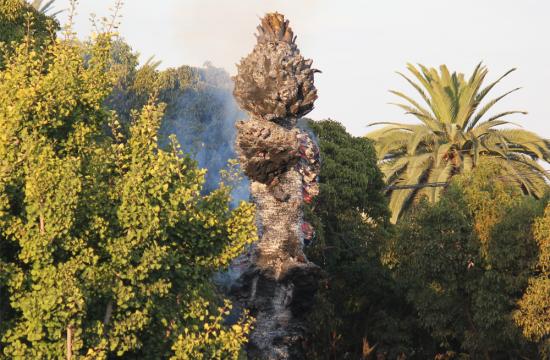 A plane that took off from Santa Monica Airport crashed moments later in a residential neighborhood of West Los Angeles around 6 p.m. Friday evening, smoldering palm trees and snarling traffic just east of the 405 freeway near Olympic and Westwood Blvd along Mississippi Ave.

The Cessna 210, being flown by a lone pilot, hit a palm tree along the 2100 block of South Glendon Avenue and burst into flames.

“I was right next to my car talking to my wife and that’s when I looked up at the sky and that’s when the plane was loosing altitude,” said Carmona. “He hit a palm first and then he went in and crashed right there on the corner.”

According to Carmona, the plane was flying in from the north when it lost altitude and slammed into a palm tree before crashing.

“It looked like he was trying to land but he wasn’t under control,” said Carmona.

The pilot, whose name has not been made available, did not survive the crash.

The plane is believed to have been registered to a Santa Monica resident.

The National Transportation Safety Board will investigate the crash.