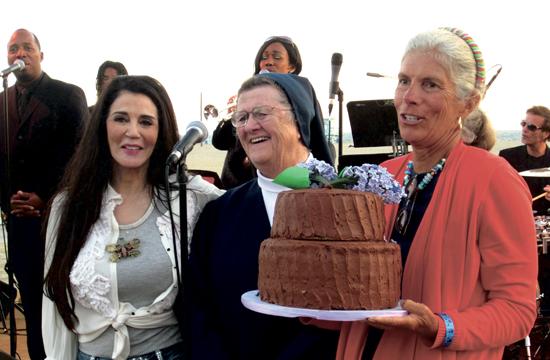 Nearly 600 guests gathered at the Jonathan Beach Club Santa Monica on July 26 in support of St. Vincent Meals on Wheels for the event “An Evening on the Beach.”

Guests kicked off their shoes and descended to the sand to dine on small plates prepared by featured chefs, enjoy wine tastings by select vintners, and dance to the sounds of the band High Rize.

As the sun set over the Pacific, the event was set aglow by a crackling beach bonfire that kept guests warm into the night.

Presented by Audi, “An Evening on the Beach” began in 2010 as part of the 28th annual American Wine and Food Festival and has continued as a fundraiser to benefit Meals on Wheels, an organization that prepares and delivers more than 4,700 nutritious meals daily to homebound seniors and other vulnerable residents across Los Angeles.

The event is now celebrated as the ultimate food and wine experience of the summer.

Special presentations were made by Clark Staub of Full of Life Flatbread, Jacqueline Buchanan of Laura Chenel Chevre, and Monique Korelishn of Urbani Truffles, who showcased black truffles, white and black truffle oils and truffle butter.

Highlighting the evening was the presentation of a birthday cake to Sister Alice Marie Quinn, director of St. Vincent Meals on Wheels, in celebration of her 77th birthday.

Sister was joined on stage by Barbara Lazaroff, co-founder of Spago Restaurant and long time Meals on Wheels supporter.