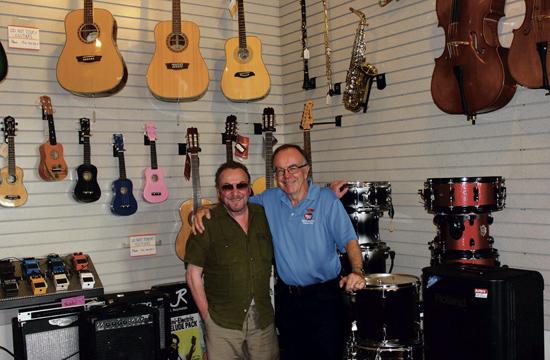 Professional drummer Paul (Chico) Fernandez was involved in the music industry when he went into business on Jan. 1, 1972 with a teaching studio, but it quickly evolved.

“I was playing six nights a week with a popular band and people wanted us to play all these gigs and we couldn’t do all the gigs everyone wanted us to do, so I started putting together bands and booking them,” Fernandez said.

“At the same time, I was teaching drums and booking bands. I added a piano teacher and then a voice teacher and then I changed the name to the Chico Fernandez School of Music. It was located upstairs of a music store, which at that time was called Cunningham’s Music Store at 1247 Lincoln in Santa Monica across from the Santa Monica Boys & Girls Club.”

His business continued to grow and he incorporated the company in 1974 – the same year his brother Victor Fernandez joined the business.

The brothers created a recording studio and photography studio that constituted their talent management business as part of incorporating the business.

“We would record their demos, take their pictures, and I’m a graphic designer too so I would design all their materials, and I would book them,” he said.

“At one time I had five groups working such as the Charlie Brown’s, The Red Onions, and I put on all the entertainment in the Miramar for a while.”

In 1979, the business decided to add a retail music store element to its operation and discontinue the recording studio operation.

“We closed up the recording studio operation and I moved the photography studio to another area and we opened it up into a music store like it had been since the late 1940s and called it the Santa Monica Music Center. That was by 1980. But the school operation has been running since January of 1972, which started with one drum student.”

In February 2000, the business moved to its present location at 1901 Santa Monica Boulevard.

Since then, the music store and its music studios have been providing the music community, schools, and local families with quality band and orchestra instrument sales, rentals, and repairs, and private and group music lessons and studio rentals.

Fernandez said they expanded and opened its Culver City Music Center in 2004.

He said quality teachers were why the business has been so successful over the past four decades.

He said people enjoyed their old school style of operation.

“People have always liked that,” he said. “Nowadays with things changing the way they are with less personal contact with more digital this and that, a lot of people really appreciate our place.”

Victor Fernandez said both he and his brother live in Santa Monica.

“Our kids have grown up here and gone to local schools,” Victor said. “We’ve been involved with the community organizations like the Chamber of Commerce. It’s a real family business and we’re both very involved in the community.”

The business offers individual private lessons on all the band and orchestra instruments.

They offer lessons on oboe, flute, French horn, trombone, clarinet, and saxophone, among others. There are also classes for piano and guitar and a performance class is available for children to learn how to play in a band situation.

Fernandez said most students started renting instruments for lessons, but the first three months of rent payments can go towards the purchase of the instrument.

Fernandez and his daughter Lana also operate a nonprofit called Outreach Through the Arts, which helps at-risk youth and visually impaired communities overcome the challenges in their lives through the performing arts.