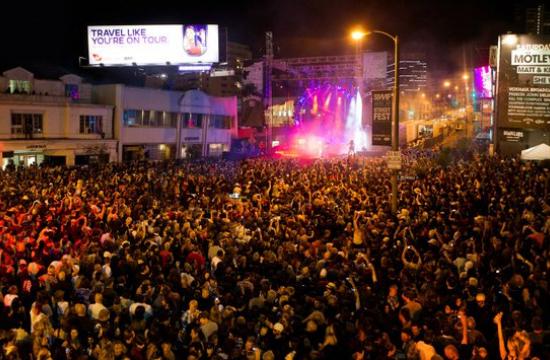 The three-day Sunset Strip Music Festival is less than a week away and it’s shaping up to be the best yet as it enters its fifth year.

Starting this Thursday, Aug. 16, the festival kicks off with The Doors at an exclusive VIP event.

However, the highlight of the festival is the all-day street fest on Saturday, Aug. 18 that will be headlined by Marilyn Manson. The outdoor stages will also feature performances by The Offspring, Steve Aoki, and Bad Religion. In total, more than 70 bands will perform throughout the day.

Nic Adler, event co-producer and owner of The Roxy Theatre, said the momentum of the festival has grown each year as it becomes better known.

“We still have to explain to people that Marilyn Manson isn’t playing at the Whiskey, or that De La Soul is not playing at the Roxy,” Adler said. “These bands will be outdoors literally playing on big stages. The more we get pictures and video, we’ve been able to build that story over the past three or four years.”

Adler said tickets were selling fast and attendance would be capped at about 15,000.

He said festival-goers could expect more experiences at the Saturday street fest.

“The LA Kings are doing an expanse in one of the lots where they are going to have virtual hockey,” he said. “A couple of our other partners are going to have bigger activations than they’ve had in previous years.”

These include Bud Light’s beer garden, a bigger lot for food trucks, and Gibson GuitarTown art guitar installations. The Jack Daniel’s Experience mobile museum will also be on site this year as well as Got2Be’s “Church of Rock,” which will allow attendees to give their rock and roll confessions and The Samsung Galaxy SIII Experience.

Adler said he took over The Roxy Theatre about 15 years ago. His father Lou opened the club in 1973, which meant he grew up on the Sunset Strip.

“I wasn’t having as much fun as everyone else in the 80s, but I remember people walking on both sides going from the Whiskey, to the Roxy to the Rainbow and that’s how I knew it,” he said. “When I took over the Roxy, I think we had kind of lost that feel on the strip. One of the things the festival has done is put some focus back on the strip. The clubs are full again. People are walking the street again.”

General admission tickets to the Aug. 18 street festival are $75. VIP tickets are $135, which includes access to the rooftop VIP area with views of the West stage, VIP areas in the beer garden and venues, access to VIP lounge On The Rox, a separate entrance, and additional perks.

A very limited number of three-day VIP passes will also be available for $250. These special passes include access to The Doors celebration on Thursday, August 16, VIP access to the Aug. 18 street festival and entrance to all of the Sunset Strip venues on Aug. 16, 17 and 18: House of Blues, The Roxy Theatre, Viper Room, Whisky A Go-Go, and Key Club (pending capacity).