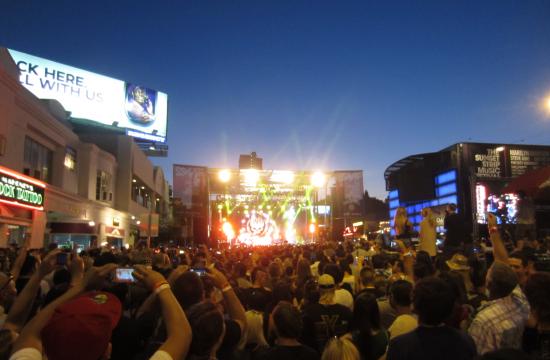 The strip was closed between San Vicente and Doheny with an stage at each end for its “street fest,” which was the final day of the three day celebration of music.

The line-up featured more than 70 bands with performances also inside the Roxy Theatre, Whisky a Go Go, and Key Club.

But what made the event so unique were the outdoor stages. Gates opened at 1 p.m. and people battled the heat to hear opening act Dead Sara.

On the main stage at the Doheny end, Marilyn Manson headlined at night, delighting his fans when he was joined by The Doors’ Ray Manzarek and Robby Krieger. They played three of the legendary band’s tracks: “People Are Strange,” “Love Me Two Times,” and “Five to One.”

Earlier in his set, Manson opened with “Suspiria” and “Hey, Cruel World” and played more than a dozen songs, including his biggest hits “The Beautiful People,” “Sweet Dreams (Are Made of This),” “Mobscene,” and the “The Dope Show” to name a few.

On stage before Manson, Offspring guitar player Noodles spoke of the band’s excitement to perform on the Sunset Strip.

“We used to drive up here from Orange County to see the Ramones play the Palladium or to see the Clash play the Whisky and the Roxy,” he said.

The band opened with “All I Want” that got everybody jumping, which continued for more than an hour. The set included songs from its new album while making sure not to leave out its hits like “Pretty Fly (for a White Guy),” “Want You Bad,” and “The Kids Aren’t Alright.”

At the other end of the strip, Steve Aoki worked his electro house music in front of a blazing LED screen. He opened with the song “Turbulence” with collaborator Lil Jon and the crowd continued to jump around with their hands up to the “Pursuit of Happiness” among other popular club hits. On his last song, he jumped into a 400-pound cake to celebrate his one-millionth “like” on Facebook.

Far East Movement was scheduled to play on the outdoor east stage, but their plane from Japan was delayed, so organizers moved them to the Whisky at 12:30 a.m. so they could rock a full set.