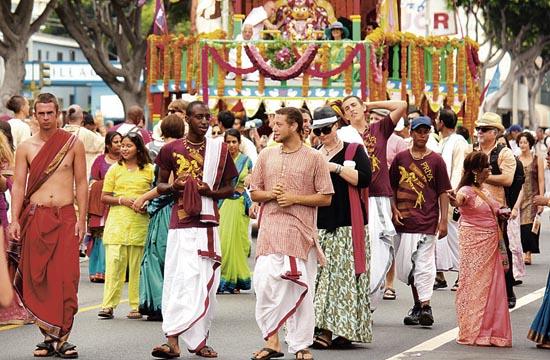 Three fully decorated four-story tall chariots led a colorful Festival of the Chariots parade along Main Street and toward the Ocean Front Walk Plaza at Venice Beach on Sunday.

The festival commenced at the Santa Monica Civic Auditorium at 10 a.m. and arrived at Venice Beach at about noon.

The Festival of the Chariots included a free feast for thousands, free entertainment, and exhibits and booths all bringing together the finest in Indian culture.

The festival celebrates Lord Jagannatha, the Lord of the Universe, and is put on by the International Society for Krishna Consciousness (ISKCON).

The Festival of the Chariots is now performed in every country across the world and dates back thousands of years to Jagannatha Puri, India.

Event promoter Karuna Dharini was pleased with the attendance.

“It does have a universal appeal because we’re all spirits soul,” Dharini said. “Our hearts are connected originally to a higher power whether you call him Jesus, Jehovah, Buddah, Allah, you name him, that’s alright. Whatever you want to call him, but we all have that spiritual connection and we’re looking for that.”