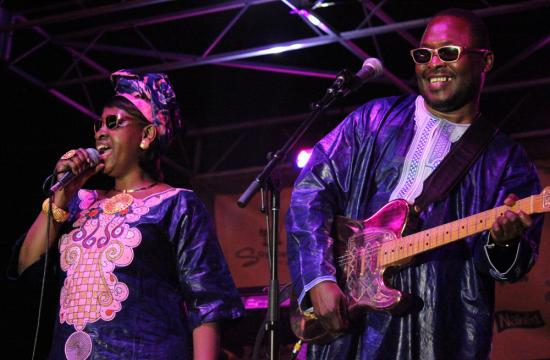 Headliners Amadou & Mariam were greeted by one of the largest crowds of this summer’s Twilight Concert Series on Thursday. Stretching to the back of the Pier’s perimeters and spilling down onto the sand, supporters were half the spectacle.

The blind duo entered through backstage with a pair of matching golden sunglasses and smiles. And while the couple could not see the loving welcome they were showered with, they surely felt it.

“Do you feel alive?” Amadou asked the crowd, tuning an engraved electric guitar.

“We’re very, very happy to be here with you tonight,” Mariam chimed in.

The capos of the crowd dove right into their famed “Wily Kataso,” jolting a party out of the media section just in front of the stage. Accompanied by a percussionist and another guitarist on the frontline, the four sparkled in traditional African garb.

Mariam commanded with bossy vocals and strong stage presence. And Amadou served as the charismatic anchor of the two. Both were cool, calm, and focused on the task at hand.

“I am very proud that so many people came out here tonight,” Amadou said after hearing of the colossus crowd.

Executing tunes one after another, track names became unimportant as the whole set transported the audience into an adventure to a far-off land. Their passion and sound unified all, and neither language nor personal style was of any relevance.

Slow, solemn transitions lead onlookers through a safari of sounds. The rock ‘n’ roll riffs of “Wari,” and organic gyrations of “Africa” were amongst the highlights.

The crowd’s encore ultimatum granted “Sebeke,” a song off of the duo’s 2008 album “Welcome To Mali.” Percussionist Boubacar Dembélé knocked away at a distinct drum called a djembe, holstered to the man like a six-shooter.

The escapade ended just around 10 p.m. “Ciao, see you next time,” said Mariam.

Mendoza’s tattooed body and powerful voice delivered a performance that even technical difficulties with a microphone couldn’t hinder. After electronics were sorted, the group found their rhythm and seized the moment.

Switching from English to Spanish tunes represented the Portland-based group’s multifariousness. Mendoza belted out “Como Ratones” with exquisite annunciation; a proof of vocal training in her past.

The singer would pick up an umber electric guitar crafted in Western fashion before humbling the crowd. “Can everyone turn around and look at that?” Mendoza asked the crowd, pointing at a majestic Santa Monica sunset. “Look at what’s going on over there! You guys are probably used to it.”

The young group was seemingly very honored, conveying a thousand “thank you’s” before ending their set.

Next week’s performances include the Latin sounds of Alex Cuba, and Lucky 7 Mambo.