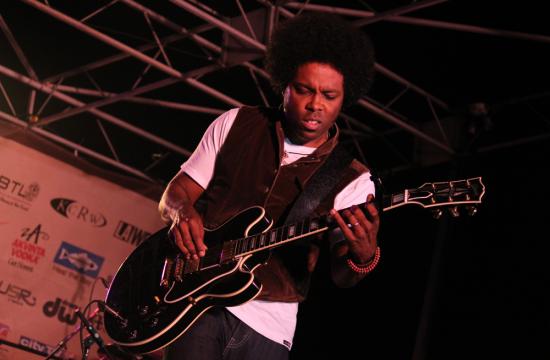 A faint smell of the sea, cilantro, rice, and beans filled the air. And hungry or not, people came out to dance.

An impromptu dance floor was set up about 50 ft. in front of the stage to feed all dance abilities. Yet the sounds of two Latin-based acts induced movement from every corner of the dock, and down to the sand.

“The temperature will rise when we play,” said headliner Alex Cuba before taking the stage.

Accompanied only by his bassist David Marion and drummer Max Senitt, Cuba sensualized the mature crowd of mostly mom and dads. The cuban rockstar’s style broke genres, where the language he sang in became of little importance. A sheer love of the stage could be seen in his eyes as he crooned into an old fashioned golden microphone.

“To perform in Spanish is my most honest way,” Cuba said. “And I am an honest artist.”

Addressing the audience in primarily his native tongue, Cuba was greeted by a plentiful lot of Southern California fans. A crew of pretty young ladies in the front row chimed in during “Caballo,” a tune with rockish undertones and samba danceability.

“It all comes down to one thing – people,” said Cuba. “Whenever I go somewhere, I try to be open and absorb, and always move in a positive way.”

“If You Give Me Love” and “Creo” of his newest album “Ruido En El Sistema/Static in the System,” demonstrated the singer’s lingual fluency in English. And while Cuba appeared less comfortable with the Anglo tongue, he delivered both songs with the same ambition.

An encore of “Dramatica Mujer” started as a solo acoustic traditional-sounding Latin folk song. His melodic smooth rhythm would be joined by his accompanists mid-song. Turning the tune into an alternative rock jam showcased Cuba’s diverse music in a nutshell for a fit finish to his set.

Lucky 7 Mambo’s professional poise opened the dance floor with gusto. A feeling of a Cuban nightclub grasped the Pier after the group’s vocalist George Balmaseda presented the band.

“This is Lucky 7 Mambo a la cabesa,” said Balmaseda.

A dedication to musicians and friends who had passed away this year – “Los Enteros” demanded participation from all hips and limbs of the crowd.

“We prepared last night,” said leader of the group and percussionist Angel Rodriguez. “All of us are busy with our own personal careers, and we came here tonight to have fun.”

While the Lucky 7 is a sort of side-gig for the guys, their accolades and musical backgrounds created a seamless performance. Rather than introducing each individual song, the band kept the party going with an ambiance that needed no formalities.

Their vibraphone – a peculiar organ-like array of upside-down chimes played with two pairs of drumsticks – added an authentic sound of Spanish Harlem for the West Coast audience.

Though coming together behind the scenes maybe difficult for the bunch, they have managed to put out a new album entitled “Lucky 7 Mambo: Chapter 2” set to drop this fall.

“We will be embarking on some of the old tracks that we have recorded already,” said Rodriguez. “We also have new tracks written by our other artists.”

Don’t miss next week’s Hot 8 Brass Band and The Gumbo Brothers presentation of music from the Bayou. Only two more concerts remain in this summer’s series.