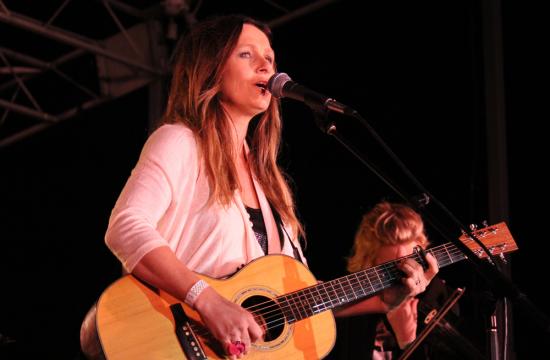 The fifth night of this summer’s Twilight Concert Series unfolded an assortment of talent hailing from “down under” on Thursday.

Australian singer/songwriter Kasey Chambers headlined the night — a petite woman with a sense of humor that doubled her volume. A stage presence that captivated more than 5000 people, Chambers’ act was like warm apple pie. Comfort food.

Hosted by celebrity guest emcee Jamie Durie, “Australia Rocks the Pier” was presented by G’Day USA and Qantas Airlines. A Qantas koala mascot circled the crowd, taking photos with children as Chambers tuned her guitar backstage. Equipped with her nine-month-old daughter strapped to her back, Chambers explained that this was the first time on tour since having her third child.

Accompanied by her father Bill, Michael Muchow, and an up-and-coming young fiddler and vocalist Ashleigh Dallas, Chambers flew into town to promote her newest album “Storybook.” The vocalist took the stage, surrounded by more instruments than musicians.

“My dad taught me everything I know about music,” Chambers chuckled. “I love having him on tour because he’s cheap!”

Dad strummed away at his iconic steel guitar while the group matched intensity with harmonious authority. Nineteen-year-old Dallas was no amateur on stage, and satisfied Chambers’ honky-tonk tone seamlessly with her country fiddle.

“When I was at school I thought I was the only one who liked country music,” Dallas confided. “But when I went on tour there were so many young people, and it was really nice to see.”

A true family affair, Chambers and Dallas clicked because their upbringings were so parallel. Dallas’ solo career back home encompasses her own father and brother, although the Chambers have become a sort of second family for her now. Chambers is producing an album for Dallas, and it’s set to drop sometime next year.

A campfire feeling took the crowd when Dallas and Bill combined for a duet (plus undertones from K.C.) entitled “Riding the Rails.” Bill’s raspy fatherly quality, and the 19-year-old’s wise voice were a highlight.

Chambers would allow the crowd to decide between a cover of John Prines or Lucinda Williams before jumping into some bluegrass.

“We don’t really know how to play bluegrass, but we like it,” said Chambers. “So we’ll pretend for a few songs.”

The group gathered around one mic, and strummed out some familiar sounds that had the crowd wondering why they were able to sing along. The Bee Gees’ “Stayin’ Alive,” and Woolley & the Camera Club’s “Video Killed the Radio Star” were presented in pure bluegrass fashion.

Other acts of the night included a curious opener, D. Henry Fenton.

In June, Fenton won a competition sponsored by the Australian Consulate to open for Chambers. The pop-rock Americana singer/songwriter boasted a stunning burnt mahogany-colored guitar he introduced as Priscilla.

“This concert is righteous because it’s not just produced by some company trying to make money,” said Fenton. “It’s communal.”

Accompanied by his band The Elizabethans, Fenton’s first song “Time For Moving On” featured a memorable guitar solo by Nick Maybury.

The group would go on to present a medley of tunes from Fenton’s debut album “Turnin’,” which dropped back in May. And while the crew did their best to seize the moment, their songs blended together in a sort of continuation of one another.

Their energy was amped during “Ain’t Nothing Hurts Like a Heartache” and a cover of Neil Young’s “Rockin’ in the Free World.”

Middle-act Matt Ellis wore dark aviators, and a denim shirt. His set began just as a flurry of onlookers took to the deck, sun-freckled and nearly outnumbering the fish below.

“Roots music is big, and it’s growing into a really healthy movement all over the world,” he said with a fading Australian accent. “You can’t get around the fact that Australia – as a country – has the amount of people that L.A. county has. It’s an intensely bigger market here.”

The whole group appeared to be going through the motions a bit, as instrumentals drowned out vocals during their first few songs. But when his wife joined him for “River Too Wide,” a harmonious match of passion and vocal structure turned the tides.

Their high-energy finale would be followed by a double encore which included The Band’s “The Weight.” A fit choice for the theme of the night.

Chloe Temtchine is an award-winning singer, songwriter, and speaker who recently received a life-saving, double-lung transplant, hear is her story....