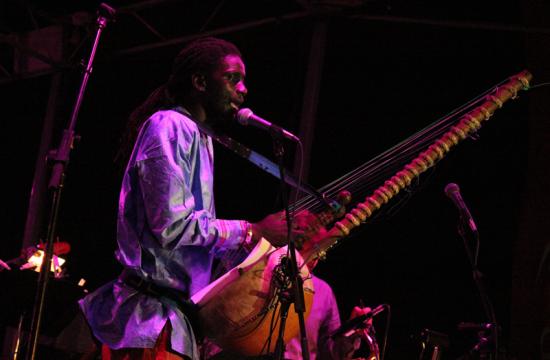 The sixth night of this summer’s series catered to a diverse pallet, offering something for everyone.

While the ensemble was plausible, a feeling that the music presented belonged amidst jugglers and gymnasts could not be denied.

Produced by PARADE, the night’s purpose was to showcase the talents of Cirque du Soleil artists in a grander market than its resident shows in Las Vegas.

“PARADE also does art shows, showcasing original artwork by not just Cirque artists, but all employees,” said the creative director of Thursday’s show Roger Butterly. “They also support [financially through grants and awards] employees in their personal artistic endeavors.”

“This is not your usual cover band,” Béraud said.

The exclusive project – composed of four vocalists and a guitar player – performed four covers in contemporary fashion. An uptempo deliverance of Pink Floyd’s “Comfortably Numb” was far from the original, but served justice. And a jazzy cover of the Beatles’ “Can’t Buy Me Love” rounded off their set soundly.

Corinne Zarzour’s Tina Turner-like demeanor got the crowd moving just before intermission. Her raspy French-Canadian voice delivered four songs “en Français” – a transformation from the normal Twilight resonance. Zarzour and her on-stage company seemed to be having a blast, enjoying the change of scenery from air conditioned casinos and buffet lines.

Noteworthy – the producers of the show did a remarkable job controlling the possible chaos that could have erupted by having so many different performers in one night. Their seamless undertaking behind the scenes was not seen by the general audience.

Toumany Kouyaté and his band Bountaloo took the stage to share a gem of native Senegalese musicianship. Equipped with his kora – a classic harp-lute used by West African musicians – rocking a beach party was no foreign task for Kouyaté.

“It is normal to have concerts on the beach in Senegal, friends and family come and enjoy,” he said.

The esteemed Melle Vasquez stole the night with her veteran disposition. An eight-year stint with the “Zumanity” show at New York-New York, and musical accolades with some of the industry’s top names has made Vasquez a commander of the crowd. The confident vocals and sincerity of her first song “Sunny Day” demanded attention.

Inspired by classic rock, and acoustic duos, Vasquez led her pack of accompanists with an electric guitar coated in a collage of classic album covers.

“I’ve given my guitar a new life,” she laughed.

The singer/songwriter explained how she was able to finalize her newest album “Better Late Than Never” while pregnant with her new-born.

“I thought, okay I’ve got to get this recording done before I have my baby, otherwise I’m never going to do it,” said Vasquez.

Her daughter’s picture would serve as the perfect album cover when it dropped earlier this year.

A dramatic finale by Martin St-Pierre and a multitude of nearly all performers of the night echoed off the break. Booming drums, eery vocals, sassing brass, and persistent percussion created a spectacle.

“Fire” felt like the end of a Cirque show, where the crowd’s multi-colors and dancing served as the performance. A surreal ambiance accented by the musicians on stage, and lights of the Ferris wheel in the background engulfed everyone into the life of the circus.