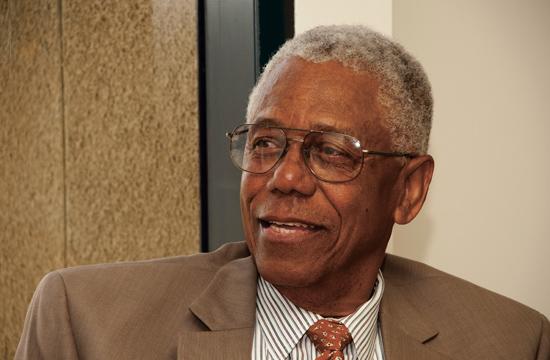 Currently serving on countless boards and community organizations, Nathaniel Trives has worn many hats over the years. From police officer to Mayor to SMC College Administrator, he has done it all. He has dedicated his life to helping others and he has come to be known as “Mr. Santa Monica” because of the high number of roles he fills or has filled in our community.

What is the origin of being called “Mr. Santa Monica?”

The 2003-04 Santa Monica Chamber of Commerce past Board Chair Michael Grunig coined the phrase Mr. Santa Monica during his introductory remarks at my installation as 2004-05 Board Chair. Board member Kristina Andresen, in collaboration with Webmaster Marc Grobman of Tommy Dew Design Inc., created the website, www. MrSantaMonica.com. The website will be totally updated and renovated as part of a 2014 celebration of my life’s work in the non-profit philanthropic community.

What have been some of your greatest professional achievements in Santa Monica?

On a personal level, in 1971, I received the highest vote count in field of 18 candidates and was elected to the Santa Monica City Council; 1975 re-elected to the City Council again with highest vote count in a field of 32 candidates; and on Tuesday, April 15, 1975 being elected Mayor of the City of Santa Monica by my Council colleagues for a two year term.

During my eight years on the City Council there were a number of significant decisions made by our Council that have had a major impact on the reputation and quality of life in Santa Monica for some time.

As the 1975 Santa Monica Centennial approached, the City Council created the Historical Site Committee, and adopted the Landmarks and Historic District Ordinance on March 24, 1976.

The Santa Monica Landmarks and Historic Districts Ordinance was amended in 1987 and again in 1991, to create a more comprehensive preservation program. The ordinance established a seven member appointed Landmarks Commission with the power to designate Structures of Merit and Landmarks, and to make recommendations to the City Council regarding the designation of potential Historic Districts.

We actually ratified the purchase of the private Newcomb Pier to virtually save the Santa Monica Pier from demolition while I was Mayor.

We added more park acreage and open space during our eight years than in quite some time; Virginia Avenue Park and Clover Park were significant improvements added to the open space inventory.

We authorized the initial Rouse Hahn development of the Gehry designed Santa Monica Place. We took down the Douglas Aircraft Manufacturing plant on Ocean Park Blvd. and turned it into Santa Monica Business Park.

Finally, again on a personal level, I was fortunate enough to attend both of President Bill Clinton’s inaugurations as a result of delivering an invitation from Santa Monica College to the President’s people in Washington in 1993 for him to speak at SMC. Lo and behold the first place in California that Bill Clinton spoke as President of the United States was in the Pavilion on the SMC Campus on Feb. 21, 1993. Indeed a highlight of my professional career to that point. Now I’m looking forward to President of the Rotary Club of Santa Monica for the 2013-14 term.

Who inspired you to become the man that you have become?

My step-dad, James Blakley, who raised me following his marriage to my mother, Lillie Bell Blakley, on December 15, 1938. He instilled in me the core values of honesty, integrity, and hard work. Having been born in Birmingham, AL in 1934, now with Dad at the head of our family we lived in Richmond, IN where my brother Ben and my sister Rachel were born; Lincoln Heights, OH, and Glendale, OH where my sister Joyce was born. We arrived in Santa Monica in the Spring of 1949 after traveling across country in a 1948 Ford Woody Station Wagon. California was good to us because our family grew with the births of my sister Carol and brother Bart. I attended Lincoln Jr. High (now Lincoln Middle School) and on to Samohi, for three years graduating in June 1952 then on for two years at Santa Monica College earning an AA Degree in 1954.

Do you have a current role model/mentor in your life?

Yes! And she is my partner of more than 57 years, my wife Ida. She has supported me, encouraged me, and been my closest confidant and mentor all during our marriage. We were married on July 3, 1955 causing me to take a break from seeking my academic endeavors and start to earn a living. We were blessed with our one and only child, Toni in 1956 while I was employed by the US Postal Service.

In 1958 I was sworn as a member of the Santa Monica Police Department and stayed 11 years earning the rank of Sergeant and spending five years as president of the Santa Monica Police Officers Association. With the encouragement of my wife I returned to school while working at SMPD and earned a BS in Criminal Justice at California State University, Los Angeles (CSULA).

When I left the Police Department in 1969, I was offered an Assistant Professor position at CSULA and teaching, I earned my MPA from UCLA Department of Political Science in 1974. Twenty-three later in 1997 I retired from CSULA as an Emeritus Professor of Criminal Justice.

In the mean time, again with the counsel of my wife, I took unpaid leave from my CSULA position to take an interim position at Santa Monica College as Deputy Superintendent and Chief Government Relations Officer for the District under the then president, Dr Richard Moore. That position lasted seven years until I retired from public service work after racking up 40 years of a fantastic career in education and government.

You are a big advocate for many of the City’s non-profits, why do you have so much passion for helping people?

All my life I have held leadership positions in my schools, church, and non-profit organizations. I fondly remember being a camp counselor for three summers (1950, 51 and 52) at the Santa Monica YMCA’s Camp Big Bear. My passion for helping those less fortunate led me to become involved more than 20 boards over the past six decades. I, along with the late Clyde Smith and others, were founding members of the Martin Luther King Jr. Westside Coalition. When the local NCCJ chapter was closed by nation, along with a core of former NCCJ board members felt the need for our own human relations council, and now we have the Santa Monica Bay Area Human Relations Council, Chaired by Jody Priselac.

While I was on the City Council we gave seed money to the Center for Healthy Aging (CHA) and after I left the Council many years later I was involved in recognizing the need to centralize certain senior services and helped in negotiating a merger between WISE and CHA. Now WISE & Healthy Aging is one of the areas top senior services provider.

From all your community work on various boards, commissions and elected positions over the decades, how do you think you’ve shaped Santa Monica into what it is today?

Simply stated, I just happened to have come along at the right time and have made myself available to help many organizations fulfill the missions in order to meet their public good goals and objectives.

What do you love most about Santa Monica?

This community has evolved to a point in its history that makes it a premiere tourist destination. The hospitality industry now being a major player in sustaining the economic vitality that is needed to support the social safety net the leaders of the town see as critically important to the fabric of our quality of life. We are a city that values innovation and sustainability living successfully side by side. We have three world-class medical centers. We have first class governmental officials that steward our resources well enough to be one of less than fifty cities in the entire USA to possess an AAA bond rating. Public safety and emergency services, second to none. The best community college in the nation and a public school system, as well as premier independent schools, that not only educates our kids but at the same time helps to enhance our real estate values. My daughter Dr. Toni Trives is Chair of the Modern Language Department at SMC. I have the best of both worlds my grandson Tristan is at Crossroads Elementary and my grandson Tanner is at Grant Elementary Pre-school. Why not love this town.