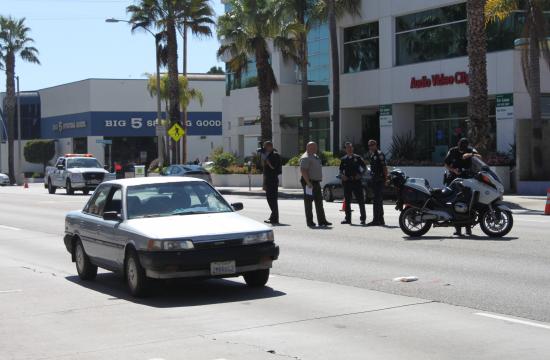 Santa Monica police closed Wilshire Boulevard at Centinela for nearly three hours Tuesday afternoon after a jaywalking 42-year-old woman was struck by a car at about 1:30 p.m. this afternoon.

Lewis said the 42-year-old female victim was transported to a local trauma center, but he did not know her condition.

Lewis said the driver of the vehicle did not appear to be under the influence of alcohol and had remained at the scene and was assisting investigators.

The accident happened directly outside the BevMo store at 3212 Wilshire Blvd.

A BevMo employee, who asked not to be named, said neither he or his colleagues saw the accident happen because the cash registers faced away from the storefront window.

“When I came out, she was lying close to that purse on the ground and there were at least eight or 10 people that were directing traffic so that people wouldn’t run her over,” the employee told The Mirror.

“My understanding from other people’s witness accounts was that the woman started walking out and got clipped.”

The employee said the victim was a middle-aged woman.

“She was covered in blood,” the employee said. “She was bleeding from her ears, her nose, and her face. She had scrapes on her legs. When paramedics arrived, they had to clip her shorts to turn her over because she was so beaten up. Luckily they got her out in a pretty quick time.”