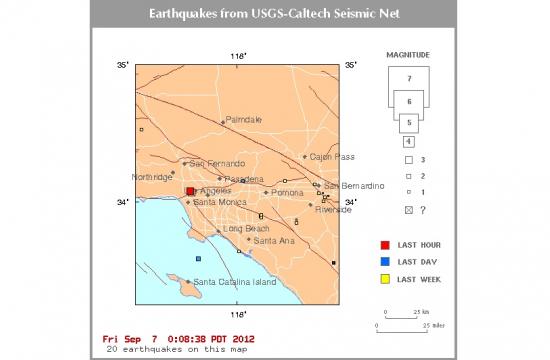 A shallow 3.5 magnitude earthquake struck at 12:03 a.m. Friday at a depth of zero kilometers in Beverly Hills, according to the U.S. Geological Survey.

Shaking of up to 10 seconds was felt from Santa Monica to Hollywood, based on posts to social media sites Facebook and Twitter.

One Facebook user said he felt a “large jolt” in West Hollywood.

The LA Times reports it was felt as far away as downtown Los Angeles and the San Fernando Valley.

The temblor comes just days after a magnitude-3.2 earthquake centered in Beverly Hills shook much of Westside in the early hours of Monday morning just before 3:27 a.m.

No damage was reported in the citywide survey on Monday.