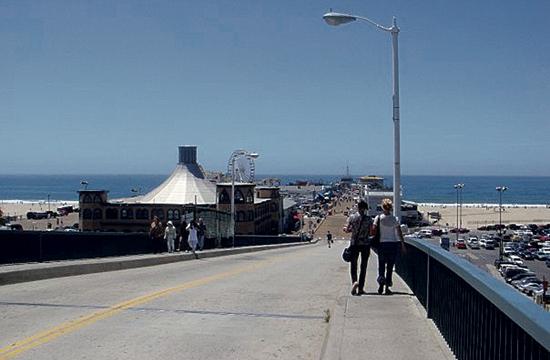 The Santa Monica Pier’s bridge is in need of updating, City Hall says, and a firm is going to come in and put together a conceptual design as well as provide some public outreach and environmental documentation services.

California-based company T.Y.LIN International would be the recipient of the professional services contract worth up to $850,000. The City Manager’s office was authorized to negotiate and execute a contract with T.Y.LIN as part of the Council’s consent calendar last week.

The existing concrete bridge connecting the pier to Ocean Avenue was built in 1939.

A city staff report stated that it is now structurally and functionally deficient and the Pier Bridge Replacement Project is intended to replace the existing structure to improve pedestrian, bicycle, and vehicular access to the pier utilizing federal transportation grant funds.

City staff added the project was eligible for federal funding via the Highway Bridge Program.

“The project is anticipated to provide a wider, multi-modal bridge, in compliance with current design and seismic standards,” city staff added.

Council members approved the concept of a pier bridge replacement in August 2010.

According to the city staff report, the pier bridge replacement project has two major objectives: “to create a safe and innovative structure suitable to the coastal environment and the City’s dynamic urban culture while protecting iconic and historical values of surrounding elements” and “to provide improved pedestrian and bicycle access to the Pier.”

City Hall had put in funding applications with the Federal Highway Administration (FHWA) and California Department of Transportation (CalTrans).

“The Federal Highway Administration (FHWA) and Caltrans have authorized this phase to begin and a funding reimbursement agreement for all preliminary engineering services between the City and Caltrans (on behalf of FHWA) has been executed in an amount not to exceed $1,250,000,” city staff said.

As part the Federal Highway Bridge Program, projects of this type usually reimburse cities 88.53 percent of the project cost, with the balance covered by a local match requirement. Thanks to “Toll Credits” authorized by CalTrans, Santa Monica’s share is already covered and the bridge replacement project is fully funded by federal monies.

Still, City Hall is allocation $50,000 “for services that are considered not federally participating,” such as “unusual architectural treatments.”

“A request for authorization of federal funds for the construction phase will be submitted once the final design is complete. It is anticipated that the federal participating construction cost of the Project will be 100 percent reimbursed as well,” city staff said. “Staff will return to Council upon completion of the environmental review phase to request project approval and additional budget authority for the final design and preparation of construction documents for the Project.”

City Hall put out a Request for Qualifications (RFQ) in March 2012. Three of the seven consulting firms who obtained the RFQ submitted formal bids, including Moffat & Nichol, URS Corporation, and T.Y.LIN International.