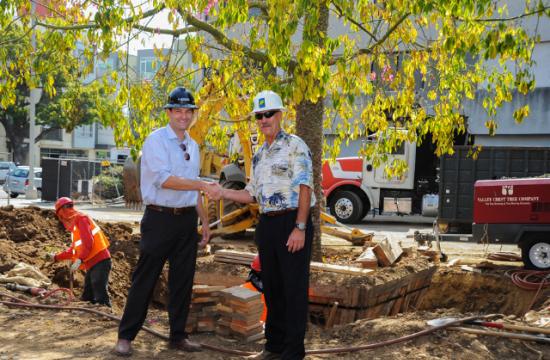 Seven trees valued at $50,000 at 525 Broadway will be donated to the City of Santa Monica’s Public Landscape Division. Alliance Residential Company, who will build a multifamily residential development at the location, announced the donation today.

The trees include one Erythrina caffra, two Choriosa speciosa, and four Prunus cerasifera.

Rather than disposing of the trees, Alliance has covered the cost of having them safely transported to the City, where the members of the Landscape Division will assign them a new home.

“Cutting trees down is never ideal,” said Jonas Bronk, Senior Development Director at Alliance. “Once we realized we had an opportunity to preserve the natural landscape and simultaneously contribute to our local community, this became an easy decision.”

Walt Warriner, Santa Monica’s Community Forester, thanked Alliance Residential Company on behalf of the City for the generous donation of these trees.

Located in downtown Santa Monica, 525 Broadway will be developed on the northwest corner of Sixth Street and Broadway Street, just blocks from the beach and a short distance from popular Third Street promenade, newly renovated Santa Monica Place and the exclusive Montana Avenue.

At completion, 525 Broadway will include approximately 120 luxury apartment homes, and 6,000 square feet of specialty retail and restaurants.