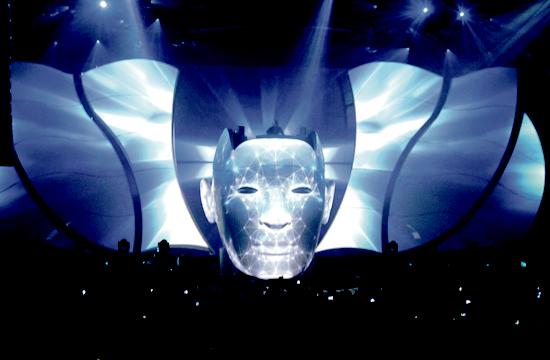 If you drove past the Santa Monica Civic Auditorium on Friday, Saturday, or Sunday nights last weekend, the deep bass coming from inside was that of Swedish producer/DJ phenomenon Avicii.

He performed from about 9 p.m. to midnight each night as part of his North American tour. The third show on Sunday night was added after his Friday and Saturday shows sold out.

Avicii, who’s real name is Tim Bergling, was barely visible at his DJ deck atop a split open head in front of a huge screen, but fans didn’t seem to mind as lights, lasers, and screens lit up the auditorium like a Vegas club.

Best known for his hit “Le7els,” the 23-year-old DJ delighted the age 18 plus crowd with his new single “Silhouettes” and the hit song “Sunshine,” which is a collaboration with French producer/DJ David Guetta.