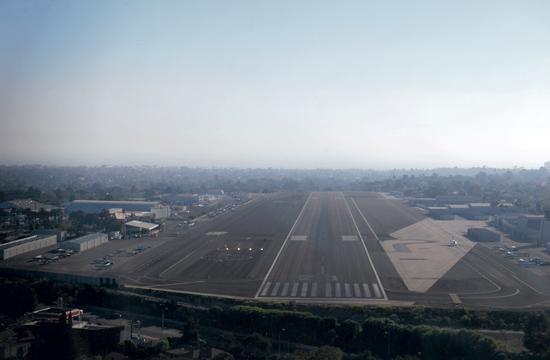 As the debate continues about whether Santa Monica Airport (SMO) should be shut down or continue operating as is, one thing is for certain: what happens in the next 30 months will determine whether or not City Hall may potentially be engaged in a litigious battle with the federal government.

In the recent past, City Hall has attempted to engage the local community in a discussion of SMO’s future via a three-phase visioning process. After the second phase of the visioning process was completed a few months ago, city staff pointed out some the discussion “has been limited to a controversy about whether the Airport should (or must) be maintained as it is, or whether the City should attempt, unilaterally, to close it.”

City staff further stated in its report of the Phase 2 findings that a unilateral act by City Hall to shut the airport down would be “an endeavor that would inevitably involve litigation against the FAA.” The FAA, or Federal Aviation Administration, has argued Santa Monica must continue operating SMO.

A few issues have become readily apparent during the visioning process, including sentiments of what certain community members believed to be the pros and cons of SMO’s current operation.

At the conclusion of Phase 2 of the visioning process, Moore Iacofano Goltsman, Inc., (MIG) submitted a report to City Hall outlining community input of the SMO’s benefits and disadvantages.

For example, many community members and residents stated they were worried about noise pollution, unhealthy aircraft emissions, the airport’s close proximity to a gas station and residences, adverse environmental impacts, negative impacts on property values and quality of life, and “a perceived growth of Airport operations.”

Cathy Larson, of the “Friends of Sunset Park,” said a high percentage of residents who live in the Ocean Park and Sunset Park communities support airport closure or reduced operations.

More importantly, Larson said there is a community sentiment of dissatisfaction toward City Hall, with some Sunset Park residents believing their voices are not being properly heard when it comes to making suggestions about the airport’s future.

“We’re concerned that we feel that the staff is not being responsive to the community,” Larson told The Mirror. “When they make recommendations to the council, it’s reflective of that bias.”

Alternatively, some of the airport’s acknowledged contributions to Santa Monica and the surrounding region include its positive impacts on the local economy, serving a strategic asset for emergency preparedness, providing a “vital link in the regional transportation system,” and facilitating a thriving arts and cultural community.

Of course, the debate between SMO’s benefits and handicaps will continue through at least 2015 and potentially beyond if the airport remains open in any capacity.

Providing some ammunition to SMO supporters is the airport’s reported economic impact.

City staff further added that SMO supports 1,487 total full-time and part-time jobs in the city, including 894 located directly at the Airport Campus.

“This means the Airport Campus ranks among the city’s top 10 employers, equivalent in scale to the number of jobs at RAND Corporation,” city staff stated.

SMO annually has a “total annual economic output impact of $275.2 million in the city’s economy,” of which $187.5 million derives directly from the airport and another $87.7 million via “indirect” or “induced” output.

Putting the $187.5 million is perspective, city staff pointed out that economic impact “is equivalent to the direct economic output generated by 1,855 average-price hotel rooms, or 1.2 million square feet of general retail, or 350,000 square feet of commercial office space.”

The HR&A study concluded the $87.7 million of indirect or induced output has a ripple effect – or “multiplier effect” – in the City’s economy beyond the aviation industry.

For example, the study said a restaurant responsible for 16 jobs would “produce 20 total jobs and $1.6 million in total annual economic output,” the report concluded.

However, the air transportation sector of the City’s economy has a larger “multiplier effect,” the report stated.

Accordingly, the HR&A study concluded 16 jobs in the transportation sector would produce “a total of 29 jobs and $6.7 million in annual economic output.”

“On average, every job in the city’s economy that is supported by operation of the Airport generates $185,000 in annual economic output in the City economy,” city staff said. “Beyond the city’s borders, the Airport Campus also supports a wide range of economic activity in the surrounding West Los Angeles sub region, including transportation of transplant materials for the UCLA Medical Center, operation of the largest citrus grower in the State of California, … and it provides a critical role in emergency preparedness.”

According to a fiscal impact analysis by HR&A, the Airport Campus as a whole “produced about $5.0 million in total revenues” for Fiscal Year 2010-2011, with portions of that revenue deriving from leases, rentals, landing fees, fuel sales, tie-down charges, interest earnings, and various taxes.

The fiscal impact analysis further pointed out that for FY 2010-2011, “salaries, supplies and other general expenses, capital costs, and the cost of services provided by other City departments were nearly equal to total revenues.”

Interestingly enough, supporters of SMO who spoke to The Mirror said part of the reason the airport’s financial operations are only at breakeven status is because of the money City Hall spent in legal disputes.

“Santa Monica’s Airport has been the subject of many legal disputes between the City and Airport users, Airport neighbors, or Airport businesses, (and the FAA),” city staff said.

“The most recent example is the eight year legal battle (in federal court) over the City’s Aircraft Conformance Program and the corresponding ordinance banning Category C & D aircraft. This dispute cost the City well over $1,000,000 and the C & D ban was struck down.”

As published in that federal court decision, Category C and D aircraft, whose approach speeds are 121 knots or greater at maximum landing weight, “make up approximately seven percent of all operations at SMO, (and) are almost exclusively business and executive jets.”

The other 93 percent are Category A and B aircraft, or planes with approach speeds of less than 121 knots at maximum landing weight.

The federal court also stated SMO “functions as a reliever airport for the Los Angeles International Airport” and “serves an important role in the regional and national system of air transportation and air commerce.”

Further, the circuit court ruled closure of SMO would place greater pressure on nearby airports, a pressure those facilities are not equipped to handle.

“It has a vital and critical role in its function as a general aviation reliever for the primary airports in the area. As a reliever facility the Airport attracts and provides services to general aviation thereby diverting aircraft away from the air carrier airports and other heavily used airports in the Greater Los Angeles Area,” circuit judges David Sentelle, Karen Henderson, and Judith Ann Wilson Rogers stated in their January 2011 decision.

“Study and analysis have confirmed this congestion and that other similar general aviation reliever airports in the area are already heavily used and do not have the ability to accept or absorb the service provided by Santa Monica Airport,” the justices continued.

Back here in Santa Monica, at least two council members said while the preference is to reach a compromise with the FAA, airport closure or litigation is not outside the realm of possibility.

“The solution that has the greatest chance of providing relief and withstanding any administrative or court challenge,” Mayor Pro Tem Gleam Davis told The Mirror. “We are in the process of evaluating how we can best solve those problems and if we can work with the FAA and pilots to avoid administrative or court challenges that jeopardize implementation of possible solutions.

“Of course, if we cannot resolve the problems in an amicable manner, we will be forced to consider closing the airport in 2015 when the 1984 settlement agreement expires.”

Council member Kevin McKeown said working with the FAA has been slow and that a federal suit is a definite possibility.

“There may just be no way to achieve everything our residents want without going up against the FAA in court. We have tried a long slow negotiation, but progress has been glacial, with little indication that the FAA will voluntarily yield much further,” Mc Keown said. “We will have to pull the community together in consensus and begin to implement what we’re told residents want for our airport. If we can do that working with the FAA, that’s our preference, but if we have to, we’ll take action and let a judge decide.”

Though the previous federal suit against the FAA was not successful, McKeown said he hopes City Hall develops a winning strategy should SMO result in litigation within the next few years.

“We put considerable resources into a court case that went all the way to the Supreme Court, and we lost. We’re not afraid to make bold moves when appropriate, but next time we want to make sure to win,” McKeown said.