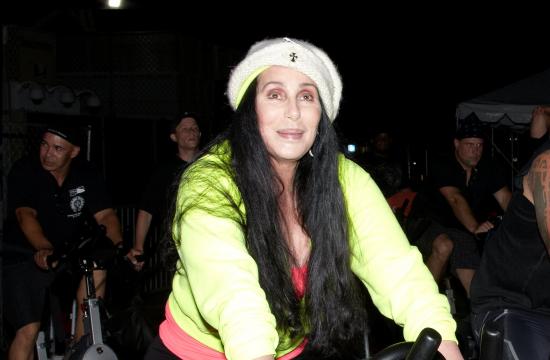 The Cycle for Heroes event was a benefit for The Heroes Project — an organization taking wounded soldiers, Marines, and veterans on climbs to the seven Summits of the World.

Arriving in the final hour, Cher showed up in support of our troops and The Heroes Project

Equinox brought 200 stationary Schwinn bikes to the pier for more than 400 riders throughout the event.

Top Equinox cycling instructors lead the ride on a stage equipped with instructor bikes, keeping energy up with a rock ‘n’ roll playlist.

Three war planes from Tiger Squadron Warbirds flew over head at 6 p.m. for the event kick-off.

The army-green jets left trails of white smoke in the sky, just above the pier, and finished with the “missing man” formation while the crowd observed a moment of silence.

Prior to the event, 15 injured and amputee veterans arrived in a motorcade at 5:45 p.m. in military uniform and cycling apparel.

Arlington West lit more than 4,000 candles in a memorial to 9/11 on the beach below the pier.

The event was free to the public and went until 10 p.m.