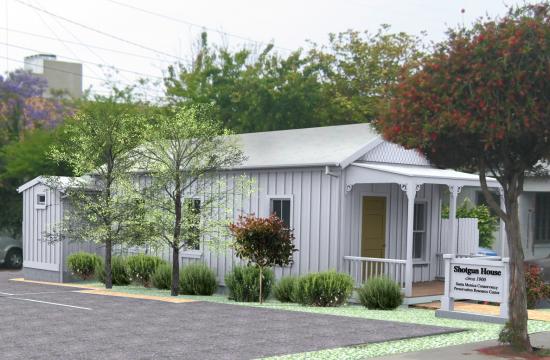 A $1.6 million Preservation Resource Center to be located in a rehabilitated shotgun house in Santa Monica is planned, but The Santa Monica Conservancy needs to raise the capital for it to happen.

The organization today released information about its public capital campaign to raise the funds.

Now, more than halfway toward its total goal, the Conservancy has successfully raised more than $860,000 in contributions from the Ralph M. Parsons Foundation, the National Trust of Historic Preservation, the Friends of Heritage Preservation and the City of Santa Monica, as well as from Morley Builders, the Minardos Group, and other generous businesses and individuals.

The campaign will enter its public phase as the Santa Monica Conservancy begins a year-long celebration of its decade of leadership in preservation.

“We have accomplished a great deal in 10 years as an all-volunteer organization,” said Carol Lemlein, President of the Santa Monica Conservancy. “The time has come to hire professional staff and secure a site easily accessible to those who want to learn more about historic preservation.”

After a successful bid to lease the landmark 1890s shotgun house owned by the City of Santa Monica, the Conservancy agreed to rehabilitate the house and relocate it to City property across from the Ocean Park Library at 2nd Street and Norman Place, a neighborhood with other landmark buildings reflecting the history of Santa Monica.

“By establishing our Preservation Resource Center in this historic house, we will provide an instructive model of the adaptive reuse of a structure that many might have thought had long outlived its usefulness,” Lemlein said.

The local history curriculum, “Building a Neighborhood,” is the brainchild of Santa Monica Landmarks Commissioner and Conservancy board member Nina Fresco.

Geared to third grade students and fulfilling California Standards for social studies and the visual arts, the curriculum gives students an understanding of how the story of a community and its residents is reflected in the changing materials, styles, and uses of its buildings.

The lessons are interactive, using kits that provide students the opportunity to build models of actual homes in the city’s Third Street Neighborhood Historic District as they study the evolution of the neighborhood.

Huell Howser, host of the popular TV show “California’s Gold,” is serving as the honorary chair.

For more information about the Connecting with Our Historic Places Campaign and other Conservancy activities, visit www.smconservancy.org or leave a message at 310.496.3146.