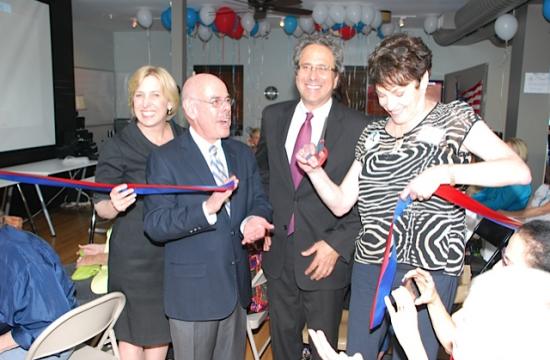 The event featured an open house from noon to 5 p.m. at its 1408 Third Street Promenade, third floor location in Santa Monica.

A public ribbon-cutting ceremony and convention-watching party was held from 4:30 p.m. to 8 p.m.

The evening was co-hosted by Organizing for America – California (OFA – CA), which is subleasing space at the headquarters and will hold daily phone banks and other Get Out The Vote activities there between now and Election Day.

The West L.A. Democratic Club is also lending support, and other local clubs may come on board as well.

The office will be open seven days a week through Election Day, likely 10 a.m. to 9 p.m. — though some days may go longer or shorter.

While OFA – CA concentrates on the re-election of the Obama/Biden ticket, PPDC will do the same, but also focus on helping state and local Democratic candidates and on passage or defeat of the various ballot propositions on the November ballot.

In addition to phone banking and Get Out The Vote operations, the PPDC Westside Democratic Headquarters will be a hub for organizing bus trips to Nevada or other nearby swing states, as was the case in 2008.