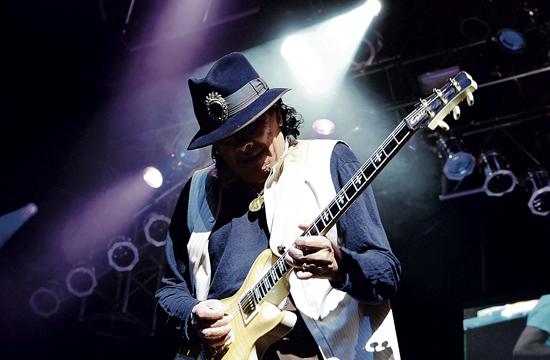 Guitar icon Carlos Santana is several months into his two-year residency at the House of Blues at Mandalay Bay Hotel in Las Vegas and the 65-year-old proves he still has it, wooing crowds as he strums through decades worth of hits from “Black Magic Woman” to “Smooth.”

The rhythms, beats, and energy he brings to the intimate venue are second to none.

The show, called “An Intimate Evening with Santana: Greatest Hits Live – Yesterday, Today & Tomorrow,” kicked off in May with shows scheduled every few months.

The next round of shows planned for early November.

“It’s a great honor to be at the House of Blues because there’s a group of entities that are committed to honoring the contributions that the United States has given to the world: Americana music,” Santana said.

He said Americana music was deeply invested in the blues, pre-Colombian music, and gospel.

“If you asked Frank Sinatra who he listened to, he would say Billy Holiday,” he said. “If you asked Billy Holiday who she listened to, she would say Louis Armstrong. You get the point. If you ask me who I listen to, I listen to everyone and anyone who’s Hispanic who does what they do from the heart. We love to honor our gift to come to the House of Blues and create an atmosphere into a laboratory – a spiritual, sensual laboratory where we can create the alchemy of giving people a style of entertainment.”

Santana acknowledged entertainment was “pretty incredible in Las Vegas” especially with the Cirque du Soleil shows that he described as “physical perfection and accuracy.”

“Some of the most incredible athletes that you can think of like Jesse Owens or Carl Lewis or baseball, football or basketball players, they are really committed to a physical discipline and that’s entertainment and I say it’s incredible,” he said. “We deal with something a little different; we deal with the Holy Ghost. That’s a different kind of muscle. The muscle most important to the Holy Ghost is the imagination. The muscle most important that human beings are being given and you need to utilize this and if you don’t you become twisted and thinking like a victim. Willingness to allow and allow willingness will give you the same ingredient alchemy that Jesus did and Mother Teresa did or the Vision of Guadalupe. To create miracles is not something beyond your capacity.”

He said he planned to invite musicians from all over the world to play with him.

“We plan to invite African people, women and men, Angelique Kidjoe and many, many sisters and brothers,” he said. “People from India and people from South America; American Indians. Whether it’s Andreas Bocelli or Placido Domingo, I’m not dropping names. I’m just telling you what’s available to us to present to you. We invite you to come and witness something that’s beyond entertainment or show business, it’s called the willingness to experience the Holy Ghost.”

House of Blues Las Vegas at Mandalay Bay Hotel has been uniquely reconfigured for the special Santana show.

Fans within a few feet of Carlos can select from several intimate locations within the venue, from a limited number of exclusive VIP packages including meet and greets, limited edition photos, specialty dining/beverage packages and stage-side specialty dining.

For more information or tickets, visit HouseofBlues.com/Santana, www.mandalaybay.com, or call Ticketmaster at 800.745.3000.