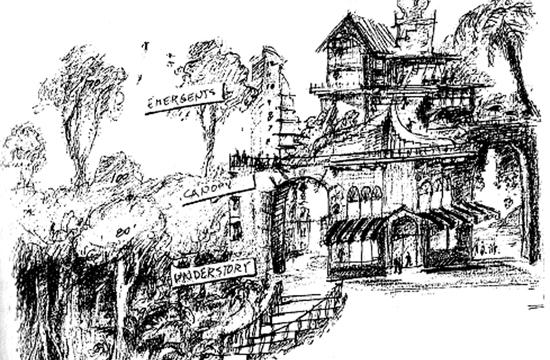 If the Santa Monica Airport is finally closed down I propose it should be converted into an urban forest, the asphalt replaced by dense, shady stands of trees of all kinds, threaded by bike paths winding past pools and streams, and little unexpected playgrounds, bandstands, and bowers.

But I don’t just see this as a place of delight and recreation: I want people to work there too. I’d like those winding paths to lead us to eccentric, charming, tree-house-like buildings where cutting edge companies create new products and ideas which will provide jobs for the people of Santa Monica and revenue for the city – much more than we ever earned from the airport.

But surely, you might be asking, even the most sylvan business park needs big roads to get goods in and out, acres of car parking for its workers, overhead power lines? How can you have beauty, livability and productivity in one package? My answer: welcome to the twenty first century.

The sort of firms who’d want to be in such an environment need a constant flow of information and ideas. They don’t need trucks to carry them – they need power and fibre optics, arriving in pipes tucked unobtrusively beneath the forest floor. And yes, their workers need to get there and get home, but they don’t necessarily need to do it in cars. There’ll soon be a rail line coming into Santa Monica that will make it possible for people from all over Los Angeles to come and work here without driving: all that’s needed is a shuttle service to take them to and from Old Airport Forest. And for those living nearby, bike lanes. Once you step inside that welcoming place, you’re in a world of cool, green shade, peace, and quiet.

You can be productive.

Because although I’d like to see the buildings looking charming, eccentric and rustic, they’d be equipped to the highest possible standards for modern computers and communications: they’d be powerhouses for the new ideas on which a modern economy like ours relies.

I’d like a proportion of the buildings created on the site to be incubators, with dirt-cheap space available to young entrepreneurs. We have our own institution of higher learning right here in Santa Monica College: wouldn’t it be great to encourage its brightest students to set up new businesses right here where they learned their skills? To say nothing of attracting the kids who went to Pepperdine, USC and UCLA and the other universities clustered in this part of Southern California.

All over the world the docks that were once vital to shipping have closed as sea-going vessels have got bigger and moved out to deeper water. Far-sighted cities have made use of the newly available space to rejuvenate themselves. Santa Monica could do the same thing with a facility that has long outgrown the era when it was practical to make and fly planes here.

Drive around the airport now and look at all the acres of desolate concrete and asphalt, and imagine what it would be like covered in trees, home to a forest where you could stroll, contemplate – and on a bench around a corner, come across some brilliant kid from a high tech incubator, dreaming up the next big thing.

The end of the airport shouldn’t be seen as a negative, but as an amazing opportunity for Santa Monica to pioneer a new way to live, work and prosper in the twenty first century.

Let’s run with it!