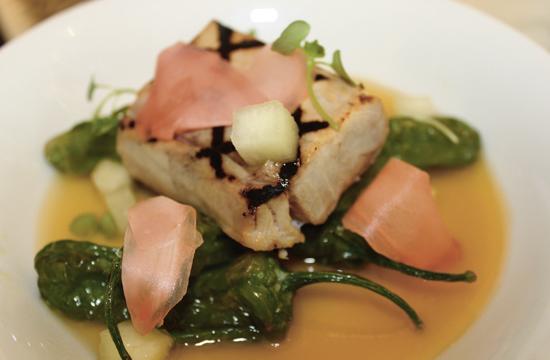 With so many local farmers who produce so much exceptional produce, FIG Restaurant Executive Chef Ray Garcia developed the Farm Dinner series to partner with various growers to showcase the fruits of their labor.

The most recent dinner was held Aug. 15 where Garcia teamed up with Weiser Family Farms, a local farm known for its delicious potatoes, eggplants, and carrots.

The dinner was served family style with 12 different dishes.

Garcia said Weiser Family Farms had been a long-standing partner with his restaurant, which is located inside the Fairmont Miramar Hotel & Bungalows.

“I refer to a lot of the farmers as partners because that’s how we see them in order to do the food that we do and do the service that we provide,” Garcia said. “It’s important to align ourselves with people who are equally passionate with their field and their contribution to the food circle.”

Garcia said he has visited the farm and has seen first hand the amount of pride and care that goes into their produce.

In terms of coming up with last month’s FIG Farm Dinner menu, Garcia said he developed dishes based on ingredient suggestions from farm owner Alex.

“One thing we wanted to do was to not focus on potatoes which is sort of his cash crop and the one that he is most known for,” Garcia said. “I really wanted to highlight a lot of his other passions and other crops that he is growing whether they are more on a temporary or experimental basis or some that are overshadowed by his amazing potatoes.”

About a week before each FIG Farm Dinner series event, Garcia said he would find out what ingredients were in their prime.

“The farms we work with are not large producers that have giant warehouses where they shelve product for months on end and gas it later,” he said. “Depending on the heat, the rain, and interference from a bug, that dictates how good the crop is going to be and we trust the farmer about a week or so out and he’ll tell us what we really need to go with.

“As a culinary team, we welcome the challenge of that scramble to try to put together the best tasting menu. One of the things I’m showcasing is our technique, but it’s mostly to highlight the harvest.”

Garcia said he was a man of simplicity and decided to take a back seat and let the ingredients speak for themselves.

“I think the Spanish roulette peppers with just a little bit of lemon and Bottarga were great because you were able to taste the sweetness and spice of the pepper,” he said. “It’s called the roulette pepper because they say one in 12 is spicy. When you reach in you never know if you are getting a hot one or not until you take that bite.”

The other two starters included San Diego Sea Urchin on sweet Ananas Melon with avocado and red shishito as well as a Beet and Sherry Gazpacho.

Among the half dozen entrée highlights was the Meat and potatoes dish featuring Rib Eye, Pomme Puree, and Sea Salt Crystallized German Butterballs.

The farm’s vibrant red beets were highlighted in a ravioli dish made with crème fraiche, ricotta, and chives.

There were three desserts that are all worth mentioning: Carrot Pudding with ginger cake and beet chips; Melon three ways (Carpaccio, Panna Cotta, Melon Soda), and a Cheesecake Parfait with chocolate cream, Persian mulberries, and lavender crisps.

The next FIG Farm Dinner will be on October 10 with Coastal Organic.