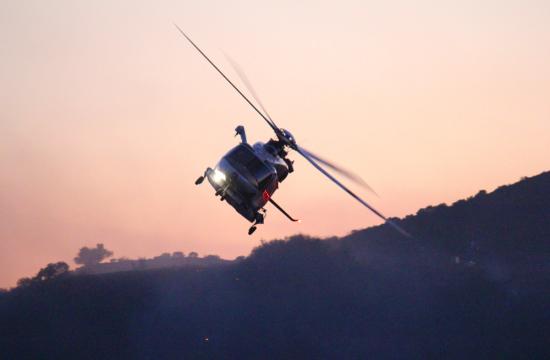 A fire broke out near the hills overlooking the houses of Bel Air north of Sunset Blvd. off of Sepulveda and Getty Center Drive around 3:30 p.m. today.

The fire has been named the CA-LFD-Getty fire and has been categorized as a wildland fire by the Los Angeles County Fire Department.

The fire broke out around rush hour on Friday, snarling traffic on the west side of Los Angeles and brought cars to a standstill along Sunset Blvd near UCLA.

The burning hill top in the Santa Monica Mountains threatened around 300 homes in the area, but no structure damage or injuries have been reported.

The flames had burned 70 acres with no containment at 6:30 p.m. on Friday, according to the Los Angeles Fire Department.

As of 8 p.m. the fire was 40 percent contained and firefighters battled pockets of fire along the hill side of Bel Air throughout the night.

According to a national weather statement high temperatures will stay in effect Saturday, Sept. 15 with the possibility of the heat rising “to around 100 in the lower elevations in the mountains.”

Heat index when the fire broke out on Friday was 94 degrees F.

It has been reported that The Getty Center near the fire conducted a voluntary evacuation.