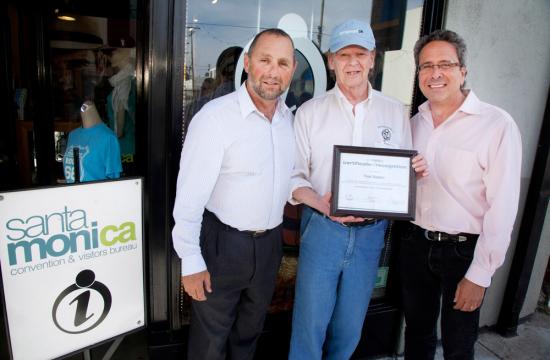 A Santa Monica resident for 53 years, Fred E. Basten is a published author by trade having written, collaborated on, or contributed to nearly 40 books over the past 30 years including “Santa Monica Bay: Paradise by the Sea” and “Palisades Park Panorama,” one of the only books ever written about the public space.

The Santa Monica Convention & Visitors Bureau (SMCVB) recently recognized Basten for 10 years of dedicated service to the City of Santa Monica as a Travel Counselor.

Basten joined SMCVB in 2002 when a close friend suggested he share his in depth knowledge about Santa Monica with its visitors.

Basten and his family moved to Los Angeles from Chicago in 1944 so his father could pursue work opportunities during World War II.

“The moment I set eyes on Santa Monica, I was a fan,” Basten said. “There was something so peaceful and calming about the beach and water. I still love to walk down there today.”

In 1959, Fred left his parent’s home in Westwood to set up home in an apartment on Ocean Ave. in Santa Monica, a few blocks away from the Victorian and Roy Jones House, which today serves as the California Heritage Museum on Main Street.

“Having been a part of this community for so long,” he said. “I feel that it is my responsibility to share the stories that I know. History is essential to our future. The only way we learn about anything is through the past. Once it is gone, there is no getting it back.”

A passionate history buff, he has written numerous books about the history of Los Angeles, Hollywood, and the entertainment industry.

One of the books Fred co-authored, “Life at the Marmont,” is currently being developed into an HBO mini-series by Aaron Sorkin and John Krasinski.

When asked how he would like to see Santa Monica in 100 years he responded, “I hope we stay friendly, clean and green!”

Santa Monica Mayor Richard Bloom said the City was fortunate to have people like Fred who captured the important history of the city, providing a window into the past.

“This allows visitors and locals to better appreciate the significance and beauty of the area,” Bloom said.

Misti Kerns, SMCVB President/CEO, said Fred was an integral part of its team and such a wonderful asset to the community.

“His love for Santa Monica is evident in the work that he does and his gifted storytelling has kept our city’s history alive for future generations,” Kerns said. “For the past decade, our destination’s visitors have been provided the opportunity to meet and to learn from an extraordinary man and author.”