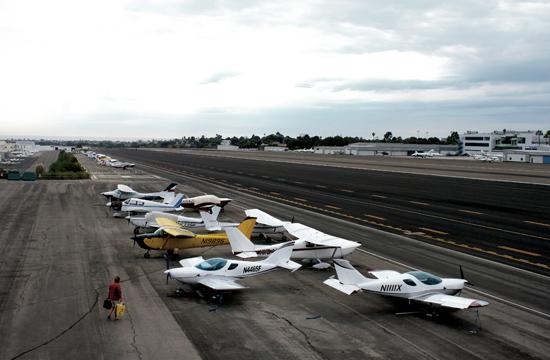 Santa Monica Airport (SMO) is certainly a lightning rod of an issue for residents both within Santa Monica city limits and in neighboring communities such as Mar Vista, Venice, and Pacific Palisades. One thing is for certain: no matter the final verdict of the airport’s fate, there will be those who will be unsatisfied with the result.

Part Three: Can Santa Monica Airport Be A Benefit To The City?

To some, SMO is a valuable asset. Others still appreciate the airport’s historical significance to Santa Monica. Then there are those making a case to either limit the airport’s operations or find a way to shut it down completely.

Venice resident Liz DeStaffany, who is a pilot and flies in and out of SMO, said the airport has immense value as a training facility.

“I think it is a travesty to close down pivotal airports under the guise of ‘train/fly somewhere else,’” said DeStaffany. “People need exposure to aviation, a place to learn and train, and a jumping off point to begin this interest or career. By shoving all airports out of business and relegating the only aviation exposure to a distant, inaccessible place in the desert is unwise. Look at the statistics from a decade ago, two decades ago. The amount of flights in and out of the airport has only gone down.”

Interestingly enough, the FAA air traffic in and out of SMO has decreased since 1999, when an estimated 230,000 takeoffs and landings took place at the airport.

According to statistics compiled by AirNav.com, as of January 2012 there were an average of 452 aircraft operations per day within a 12-month period, or fewer than 165,000 takeoffs and landing in one year.

Some other interesting statistics compiled by the website: 61 percent of SMO traffic is “transient general aviation,” while another 30 percent is “local general aviation.” The remaining traffic is split between air taxi and military.

A few local city officials and prospective council members chimed in on the issue, providing perspective on how they see SMO’s future playing out.

Councilmember Bob Holbrook, for example, said finding a happy medium that would satisfy both local residents and the Federal Aviation Administration (FAA) seemed rather difficult.

“The majority of the affected residents want the airport to close,” Holbrook told The Mirror. “While a compromise with the FAA seems remote, if the jets were eliminated then the community might buy into a smaller scale airport. I doubt if there is any compromises to be made with the FAA.

“They won’t give an inch, so (it’s) difficult to imagine anything less than vigorous litigation to regain control of our airport.”

Speaking of City Hall gaining control over the airport, Planning Commissioner and City Council candidate Richard McKinnon said he envisions SMO as a “recreational airport,” something that might be achieved by possibly eliminating 2,000 feet of runway.

While there are multiple legal agreements in play, one agreement seems to give Santa Monica control over at least a portion of SMO come July 2015. That area of control is the western portion of the runway. There is a hope by some that if City Hall eliminated the western portion of the airport, about 2,000 feet of runway (keeping 3,000 feet of runway intact) would be taken away and jets would not be able to fly in and out of SMO (a 3,000-foot runway is not enough space for a jet to operate a takeoff or landing).

McKinnon also suggested that if a portion of the runway were to be shut down, that space should be serve as home of a manicured park or Arboretum.

“I’m not preempting anything but I have in my mind of what would be some great uses,” McKinnon told The Mirror. “I think we can transition into something better for Santa Monica.”

Another City Council candidate Bob Seldon thought it was a good idea to curtail about 40 percent of the runway.

“There is no question the city should cut the 2,000 feet of runway,” Seldon told The Mirror. “That would get rid of the jets. The city has a clear right that portion of the land.”

“I would support disabling the 2,000 feet of runway,” he told The Mirror. “I am sure this would bring legal challenges from the FAA and others and so the City must be prepared to take on those challenges.”

Seeking to close down at least a portion of the airport is one thing, but the next logical question is what to do with the land if it manages to become available.

“I have no doubt that developers, and some in City Hall, are already eyeing SMO as the future home of any number of housing or mixed-use developments,” City Council candidate John C. Smith told The Mirror. “We don’t need hundreds of luxury condos few can afford, or the crush of traffic they would bring to an already congested area. If residents want SMO closed, the land should become a resource everyone can enjoy.”

Smith went on to suggest an “expanded Clover Park” or even “the future home of a new Santa Monica High School,” among other ideas.

Meanwhile, Seldon observed the space could be used for high-tech businesses “or something that is neighborhood friendly.”

On the other side of the coin, there is an argument being made that SMO should remain open because it prevents planes flying in and out of LAX from flying at lower elevations within the Santa Monica airspace.

According to an FAA spokesman Allen Kenitzer, aircrafts operating in and out of SMO directly impacts the flight paths of LAX departures and arrivals, particularly since both “are located approximately 3.9 miles apart.”

“Aircraft normally depart to the west from each airport,” Kenitzer of the FAA told The Mirror. “The two airports’ departure paths eventually converge out over the ocean. As a result, SMO departures must be sequenced with LAX departures to provide safe separation and spacing between aircraft.”

That “safe separation and spacing” prevents pilots of LAX aircraft from flying closer to or at lower levels above Santa Monica, a few members of the Friends of Santa Monica Airport (FOSMO) said.

Meanwhile, Robert Rowbotham, a pilot and president of FOSMO, said it makes no sense for airport opponents to recommend the elimination of flight schools at SMO.

“Everyone here trains in the flight schools,” he told The Mirror, adding that one out of every three flights he takes involves some form of training “just to get better at what I do.”

“When they (promote) the idea of closing down these flight schools, what you’re saying is, ‘we want these pilots to be completely out of practice and behind the times.’ It’s the worst possible thing you can do,” he said.

Kenitzer added beyond the management of flight paths, the FAA “has taken steps to limit pollution from SMO traffic.”

“We instruct jet pilots to turn on their engines shortly before departure to prevent them from idling on the tarmac while they wait for departure clearances,” he said. “Additionally, we line departing jets up so they’re facing east to prevent them from expelling exhaust directly into neighborhoods north of the airport. We turn them south and then west onto the runway only when they are about to depart.”

“Timing is everything,” Councilmember Kevin McKeown said. “We will be able to do things in 2015 that would certainly be reversed by a court if we were to implement them now, prematurely. Declining to act impulsively doesn’t diminish our commitment to real change in time; it strengthens our ability to actually make change happen.”

He added that the current city leaders are making every effort to not rush into a decision but is instead operating with concerned deliberation.

“The Council is already mindful of the need for a thoughtful, measured timeline,” McKeown said. “We must move incrementally, watching the clock tick down to 2015, knowing that thousands of Santa Monica households are impacted by the airport every day and that there’s reasonable impatience for us to act more quickly than would be wise.”

“In all likelihood the only way to avoid litigation would be for City Hall to negotiate with the FAA,” Winterer said. “However, I don’t believe the FAA has any interest in anything other than maintaining the status quo at SMO, so negotiations are probably pointless. I believe we’re headed to a showdown in 2015, at which point City Hall should close the 2,000 feet of runway transferred by a quitclaim deed in 1949, thereby eliminating jet traffic, and close the flight schools which generate 60 percent of air traffic, two moves which will significantly lessen SMO’s impacts.

“Litigation will follow and cost money, but the reality is taxpayers already subsidize SMO so operating the airport as is makes no fiscal sense.”