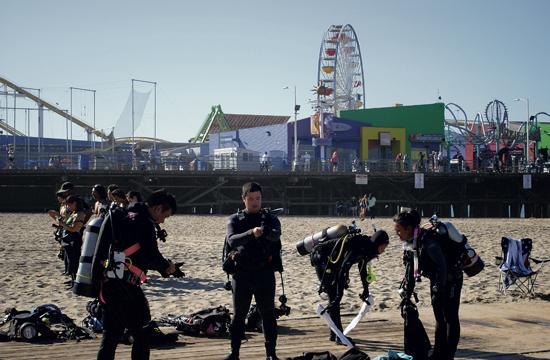 Despite the overwhelming heat on Saturday, thousands of volunteers across Los Angeles came together at 9 a.m. to scour city beaches, rivers, and urban neighborhoods as part of the 23rd annual Heal the Bay Coastal Cleanup Day.

Almost 10,000 people from Compton to Malibu picked up an astonishing 38,598 pounds of waste during the three-hour event.

Cigarette butts, Styrofoam, and plastic bottles were among the most common items collected across the 56 miles of terrain.

Rare and unusual objects were also found during the cleanup.

In Santa Monica, a headless dead rooster and a headshot of an aspiring actor were uncovered in the ocean by volunteer divers.

In other cleanup sites, a dead cat in a bag, a rifle barrel, and a 25-gallon oil container were found.

Scuba dive teams participated in the Santa Monica, Malibu, and Redondo Beach sites. Kayakers were able to help at the Marina del Rey site. Mountain bikers, a new addition to the program, hauled away detritus at the Malibu Creek.

Additionally, the Santa Monica beach sites were packed with students from different grade levels eager to clean the beaches. Families and teachers came out to improve their communities as well.

Maria Avalos, currently a teacher at the UCLA Lab School and a first-time volunteer for the Coastal Cleanup Day, was among the many adults who were on a mission to improve local beaches.

“It’s the second year UCLA is doing it, but it is my first time this year,” Avalos said. “I’ve been talking to my kids a lot about this event and talking to them about the environment and I finally thought to myself, ‘You know what? Instead of just talking, I should just walk the walk. It irks me to see trash cans everywhere, yet people can’t walk a few feet to throw the trash away where it belongs.”

However, the majority of ocean pollution comes from the city storm drains that carry urban runoff and dumps them into the Santa Monica and San Pedro bays. Thus, it is essential to not only help at the beaches, but also in the inland, according to a volunteer helping out near tower 1550 in Santa Monica.

Another new Heal the Bay site in Santa Monica was at the end of Bay Street, also known as “Inkwell” for its history as a popular beach hangout for African-Americans throughout the 1920s and 1960s. Members from the Black Surfing Association and L.A. Black Underwater Explorers discussed the history of the site and their mission.

Heal the Bay’s Coastal Cleanup Day has resulted in accumulating 1.6 million pounds of trash since it started back in 1990.