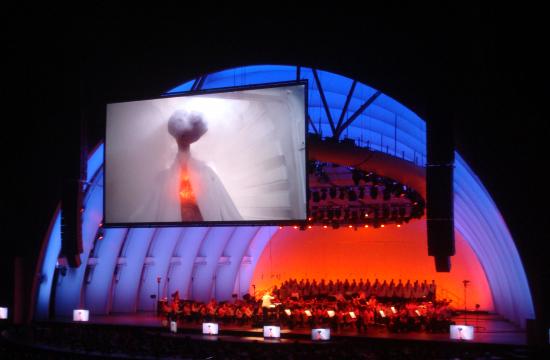 For the fifth year in a row, America’s most accomplished ccomposer John Williams embraced the Hollywood Bowl on Friday and Saturday nights as he teamed up with the Los Angeles Philharmonic to present some of his biggest and best loved movie hits.

Williams began the evening by saying it had been his privilege to create music for five Olympic opening ceremonies.

He opened the night with various Olympic themes and compositions including “The Olympic Spirit” score he created for the Seoul Games in 1988.

The piece was played to footage courtesy of NBC Sports showcasing highlights from the last four Olympics dating back to Sydney in 2000.

“On a personal note, whenever I think about the Olympics and look at these films and look at these young people competing, I think you cannot get down on the young generation,” Williams said before conducting the piece. “The discipline, commitment, hard work, and energy of what they do is really truly inspiring.”

After every string of pieces before intermission, Williams would turn around and talk to the near capacity Bowl.

He joked about times gone by where the cost of seeing a film was 35 cent and he spoke about his passion for film and creating music.

He said he particularly loved adventure films and the music that went along with sword fights.

He talked about one of his more recent collaboration with Steven Spielberg – creating the music for The Adventures of Tintin – that was their first animated film together.

“In Tin Tin, there was a great old fashioned pirate sword fight and it gave me the opportunity to have some fun and write a great old fashion piece of sword fight music,” he said. “I suggested to Steven that I actually show the scene here at the Bowl and play music to it. And he said ‘No, no, no. Why don’t you gather some of the famous sword fight moments from earlier films and find some new ones and play the Tin Tin music.’”

And that’s exactly what he did.

The montage included clips from Indiana Jones, Pirates of the Caribbean, Hook, The Pirate, The Mask Of Zorro, Puss In Boots, and The Princess Bride to name a few.

Williams welcomed out special guest violinist Gil Shaham, saying he was “one of the most celebrated artists working internationally today.”

Many of Williams’ mainstream hits were played – especially several Star Wars scores that turned the Bowl into a colorful array of bright colors with fans waving their lightsabers in the air.

However, it was the 30th anniversary celebration of E.T.: The Extra-Terrestrial that received the most applause.

“We often play excerpts from the music, but tonight, because of the anniversary, I thought we would play the entire last reel of the film,” Williams said to the delight of the audience. “I discussed this with Steven Spielberg, and he was excited about doing it here at the Bowl. He made a special new copy, high-density photography, which would be shown to you tonight for the first time.”

He described some of the scenes before launching into conducting the music.

“You will see close ups of child actors and you will see them in the frantic moments of the beginning of the bicycle chase,” he said. “You will see close-ups of their faces and their expressions as emotions change at the very sentimental and touching scenes right at the end of the film.”

After declaring the E.T. tribute as the final piece of the night, the crowd erupted when he returned to the stage for an encore and played another piece from Star Wars.

Williams’ 37-year artistic partnership with director Steven Spielberg has resulted in many of Hollywood’s most acclaimed and successful films, including Schindler’s List, Jaws, Jurassic Park, Close Encounters of the Third Kind, the Indiana Jones films, Saving Private Ryan, Amistad, Munich, Catch Me If You Can, Minority Report, A.I. Artificial Intelligence, and Empire of the Sun.