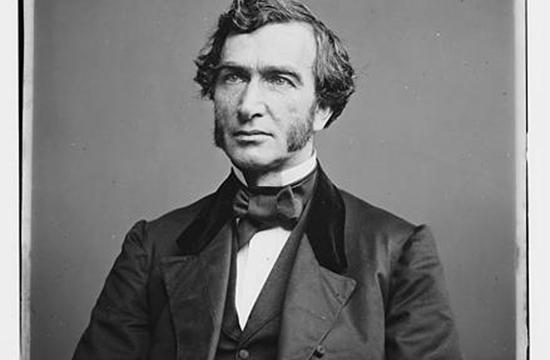 Justin Morrill, 1810 – 1898, is a hero in every American hometown. We have all benefited from his historic piece of legislation, The Morrill Act, creating the Land Grant Colleges.

The Act provided each state with 30,000 acres of Federal land for each member in their Congressional Delegation. Since every state has two senators and at least one representative even the smallest state received 90,000 acres. The land was then sold by the states and the proceeds used to fund public colleges.

During the Civil War, President Lincoln signed into law, on July 2, 1862, the first Morrill Act. Officially titled “An Act Donating Public Lands to the Several States and Territories which may provide Colleges for the Benefit of Agriculture and the Mechanic Arts.”

Every state that had remained in the Union received a grant of 30,000 acres of public land for every member of its Congressional Delegation. Originally sixty-nine colleges were funded by land grants, including Cornell University, the Massachusetts Institute of Technology, and the University of Wisconsin at Madison.

Previous attempts to pass the Act had been blocked by legislators from Southern States. With succession, and the absence of the Southern Legislators, Morrill again introduced the Act and was successful. In 1890, after the Civil War, Morrill proposed and was successful in passing a second Morrill Act, specifically for the purpose of extending the Act to the sixteen southern states that had formed the Confederacy.

Morrill was the son of the town blacksmith in Strafford Vermont. At the beginning of our country’s history we had universal education only for children. University was only for the privileged. Morrill wanted to go to college, but his family didn’t have the money. Instead he became a 19th century merchant and eventually owned and operated four successful general stores, which in the 19th century allowed him, even required him, to develop the skills of a trader, an accountant, a lawyer, a postman, a politician and a diplomat.

He was so successful that he was able, at age 38, to retire from business, to pursue his interests in architecture and horticulture and to become the Congressman and then the Senator from Vermont. He started as a Whig but became a Republican, having joined the ‘Party of Lincoln.’ At that time in history the Republican Party was known as the “party of the working man.”

Strafford Vermont, the birthplace of Justin Morrill (www.morrillhomestead.org), celebrated the sesquicentennial of the Morrill Act this summer with a symposium, “Carrying forward Justin Morrill’s vision for the future of higher education in the 21st Century.”

Welcoming the audience to the symposium, Vermont State Senator Dick McCormack said, “the austere, angular dignity and probity of our Yankee ancestors are expressed in the architecture of this town house where we gather together today.”

Correspondent John Merrow set the tone for the symposium lamenting the fall of the number of U.S. students graduating from college and university so that we are now in 20th place internationally. He said, “America had historically recognized investing in people was good for the country.”

Merrow told the audience, “The challenge of education is to create new leaders, to create the desire to be part of something bigger than oneself. We’ve lost our way in education. We’re thinking small. Education is exploration. The job of education is to grow citizens. Instead we have monetized education. Public support used to be in grants but now two-thirds of graduates have debt and being in debt when you graduate changes your life and career choices making it harder to go into service careers as a result.

Professor Clement Price spoke eloquently of the “coming apart of the Union and the long, nightmarish, brutal Civil War.”

Price lauded the 1868 Land Grant Act saying, “Morrill’s vision of a nation of ordinary, but educated Americans was an expansion of democracy. The 2nd Morrill Act, passed in 1890, “must be placed alongside the Emancipation Proclamation as education was associated with a new birth of freedom” he said.

“With emancipation from slavery the work of freedom could begin. The sons, and later the daughters, of ordinary people could begin the path to the American century.

Price warned, “The Legacy of Land Grant Act has been interrupted – education is at risk and so is the American future. When Lincoln signed the Emancipation Proclamation there existed an ethos of social good, the abolitionists and other reformers embraced a vision of social good, an expansion of the American Revolution, the promise of American citizenship. By comparison our time is seemingly bereft.”

Vermont Senator Patrick Leahy closed the Symposium with these words; “We cannot overstate how much the Morrill Act made millions of people’s lives better due to his vision and values. Morrill’s commitment to education, to agriculture, to lifelong learning, to business, to architecture, to horticulture and to political service defined his life.”

We in Santa Monica have shown our commitment to education but as we begin the new school year are we asking the right questions? Are we, in the words of the speakers at the Symposium, “thinking big”? Are we “educating citizens,” are we “expanding democracy” and “carrying on the work of freedom”? Aren’t these the questions we, and every generation, must ask and answer if we are to pass on the values that created this nation to the next generation?