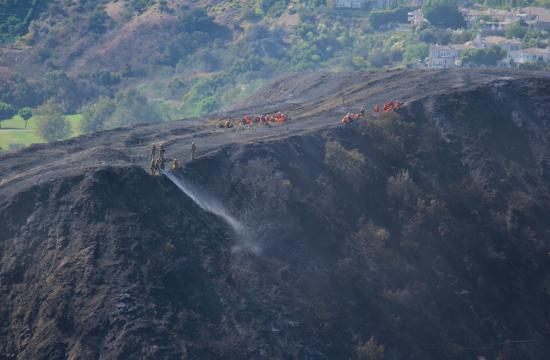 Los Angeles City fire crews contained the Getty fire that started on Friday along the eastern side of the Sepulveda Pass along the 405 freeway consuming around 90 acres of dry brush in the canyons of Bel Air this weekend.

Since there was no lightning in the area, arson has been suspected.

The fire started around 3:30 p.m. Friday and burned east threatening 300 houses in Bel Air neighborhood but was largely extinguished by Saturday afternoon.

Heat index when the fire began was 94 F.

Fire helicopters could be seen dropping water in five minutes intervals along the Bel Air canyon inbetween Moraga Dr. and Linda Flores Dr. in order to quell hot pockets of terrain that had the possibility of re-igniting in the hot weather that eclipsed one hundred degrees in Los Angeles on Saturday.

Smoke could still be seen rising from the brush but no pockets of fire were visible in the canyon as of 3:30 p.m. Saturday afternoon.

No injuries or property damage have been reported.

According to the Los Angeles City Fire Department, the fire is 100% contained with Sepulveda Blvd. reopened for traffic but the cause still under investigation.

The Los Angeles Fire Department is beginning to demobilize but will maintain an overnight presence to ensure no flare ups.